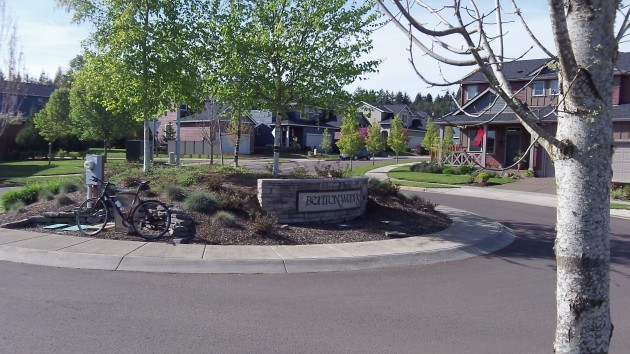 One of two traffic circles in the Benton Woods area of North Albany.

Just to set the record straight, Albany has five roundabouts and the one under construction now is number six. I was wrong when I wrote, in a photo caption going with a story about the North Albany Road reconstruction project a few days ago, that it would be the fourth.

I’m not sure where that “fourth” came from. I think I heard somebody say so at a meeting. But we forgot the two roundabouts in the Benton Woods subdivision in North Albany. Granted, these two are smaller and carry less traffic than the others. Still, roundabouts they are.

This roundabout binge in Albany started about 10 years ago with the first one at North Albany Road and Gibson Hill. (It was completed in 2005 but did not become fully functional until a year or so later.) Then came the one on Knox Butte when Timber Ridge School was built. The two residential roundabouts in Benton Woods came next, and finally, last year, the intersection of Main Street and Salem Avenue got one too. (Are there any others I don’t know about?)  And now, No. 6 is being built at Quarry and Spring Hill, apparently without any fuss in terms of objections from the motoring set.

On the west side of Corvallis now, Benton County is building a big roundabout at 53rd Street and West Hills Road. The county went so far as to set up a mockup at the fairgrounds so drivers could practice. They could have just suggested that drivers to run over to Albany and practice there.

At the same meeting where I got the impression that the Spring Hill roundabout would be the fourth, somebody said Benton County would like that one removed once the North Albany Road construction detour is no longer in force this fall. Considering the general utility of roundabouts in preventing both accidents and delays, I hope that remark was mistaken as well and this latest circle will be allowed to remain. (hh)


5 responses to “Albany, where roundabouts flourish”