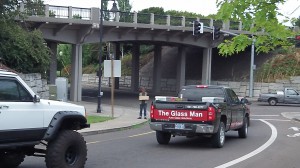 At the Albany underpass Sunday afternoon.

Albany is taking another stab at cleaning up a couple of related nuisances — the mess left from squatting in public spaces, and street corner begging.

The city council this week is taking up ordinances against having open containers of alcohol — and urinating and defecating — on public property. You’d think those latter two items would be against the law already, but apparently not.

The new police chief, Mario Lattanzio, thinks enacting these proposals will help his troops deal with an increasing problem. The root cause is alcohol addiction, and if these measures help force a few bums to quit drinking, they’re worth it. It’s a big if, but worth a try especially if the mid-valley also finally gets a detox center where people detained under these ordinances can be taken.

On the subject of street corner begging, Lattanzio says he has seen video evidence of near accidents as drivers pass money out the window instead of taking off when the light changes. Now the city wants to enforce state law against impeding traffic in this way. Presumably there’s also a law against pedestrians stepping off the sidewalk into the traffic lanes. Enforcing these laws should put a stop to this form of solicitation, which does not really help the ones in need. Ending it can’t come too soon. (hh)

From David Moore, via Facebook: One of the main “root causes” for the homeless blight was the city bending over backwards to enable Helping Hands to relocate hundreds of ex-prisoners into this city; and the local newspaper pretty much ignored it, right?… The mission actively and notoriously solicited the prisons in Oregon to fill the Helping Hands Mission here in Albany, causing a disproportionate number of violent and troubled people to reside in this city. Alcohol is the main problem here? Really… If you want to blame it on a dangerous drug, that drug is called methamphetamine.