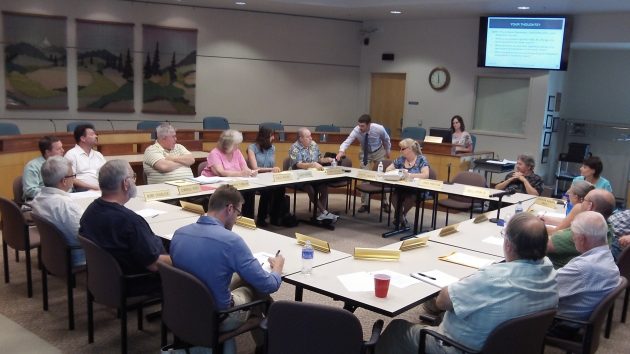 Albany city officials want more building and business downtown. To that end they’re launching a review of the city development code, hoping to get rid of regulations that needlessly stymie developers and builders.

Whether the goal will be met is an open question. Planning consultants hired for the review, Angelo Planning Group of Portland, outlined a series of items that sounded suspiciously as though they might yield more rather than less regulation. They mentioned “stringent design standards for key areas” on items such as materials, the height and “massing” of buildings, ground floor uses, maximum and minimum heights and so forth.

They were talking to a joint meeting Monday of the city council, planning commission and landmarks advisory commission. Some of the Albany officials and others present said they were mostly interested in getting more flexibility. Landmarks chairman Bill Ryals said he was a little scared that the end result might mean more rather than less interference with what property owners want and need. Councilman Rich Kellum wanted to be sure that people affected by development standards be brought on board in the discussions.

Angelo Planning Group will work in conjunction with Crandall/Arambula, the Portland design firm responsible for much of the previous planning in central Albany, including the Town Center Plan of 1995. The city’s bill for the consulting will be $74,870, an appropriation approved in April by the Central Albany Revitalization Area, the city’s urban renewal district.

The consultants plan to outline potential code changes in September and October and draft proposals for the council and others by December. Hearings on the code proposals would come in March and April 2017.

CARA launched this effort after it had approved a development project by Scott Lepman on Third Avenue, and the city and Lepman then discovered that part of his residential construction was prohibited by a required setback from an adjoining commercial use. Rather than fix that setback provision alone, the city decided to look for and get rid of other obstacles to “infill” construction in central Albany. The review now covers three zoning districts in central Albany: Central Business, Historic Downtown, and Waterfront.

Lepman told me he was optimistic that the process would work out OK. (hh)