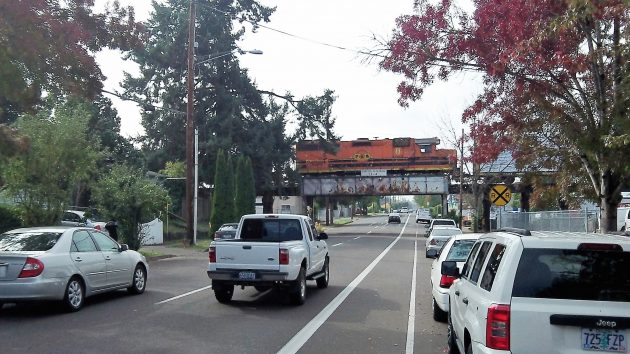 Hoping to cut down on the number of times that trucks get crunched by the railroad trestle on First Avenue, the Albany city administration has decided to upgrade warnings to give drivers a more emphatic heads-up.

City Manager Wes Hare told the council Monday what he thought could be done, and the council had no objections.

Council members had previously complained that the railroad’s own warning lights on the bridge were far too dim and could hardly be seen even though they take turns flashing every few seconds. There also had been calls for the railroad to repaint the bridge a brighter color so it would be more noticeable to drivers on the street below.

In an email to me on Wednesday, Hare summarized the city’s plan of action: “We are adding some LED lights to existing signs and possibly painting the trestle. We are also looking at putting some heavier weights at the end of the chains. We have also contacted GIS services to make sure the height limit on First is noted in their systems.”

The warning chains are about a block upstream of the overpass on First, a one-way street. They’re supposed to make a racket when they hit the top of trucks or trailers taller than the 11-foot, 4-inch clearance posted on the bridge. Council members have theorized that by the time the chains hit something, the noise is behind the cab and the driver either is puzzled by what it means or does not hear it at all. Bigger weights should make more noise.

Hare told me he had not yet seen an estimate of what these steps will cost. And he said he’d be reluctant to spend more than $2,000 without going back to the city council. “The problem I’m trying to avoid is spending a large sum of money as some jurisdictions have done, only to find the new system didn’t solve the problem.”

Truck-crunching railroad overpasses are not uncommon around the country, as a sampling on the Internet shows. To bypass the Albany underpass, there has long been a posted mandatory detour, but now and then drivers either ignore or don’t see the signs. (hh) 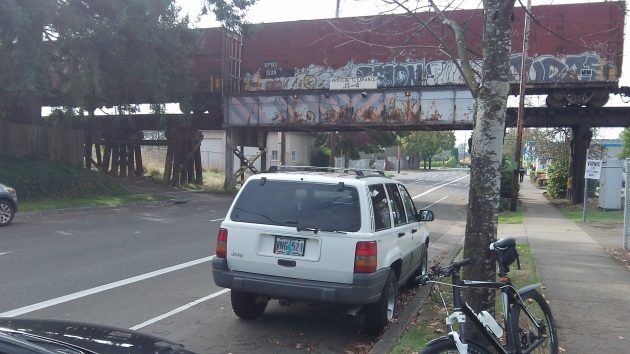 The clearance warning blends with the background of graffiti on a stopped train.

One response to “Albany to upgrade trestle warnings”