Albany to get its “BottleDrop” The recycling cooperative plans to remodel this former tool store as its redemption center.

An ad by the Oregon Beverage Recycling Cooperative in the University of Oregon’s magazine made me wonder whatever happened to the plans for a central redemption center in Albany. So I asked, and the news is that Albany will get one, probably by the end of August.

From Cherilyn Bertges, its spokeswoman, I learned that the Portland-based recycling cooperative had found an Albany property and hopes to open its “BottleDrop” center there. “Things are not set in stone yet,” she said by email, “but we are hoping to have OLCC approval by mid June, and open near the end of August.”

The property is the commercial building at 2141 Santiam Hwy. S.E., the former home of a tool store, now vacant and plastered with notices in the windows. One of them makes note of the application to the Oregon Liquor Control Commission to allow a redemption center there.

The application says the center will accept the water, beer and soft-drink containers for which stores charge a deposit under Oregon’s Bottle Bill. When it opens, six retailers within two miles of the center will stop accepting empties. They are Bi-Mart and Fred Meyer directly across Santiam, Costco, Mega Foods, Rite Aid and — farthest away — Walmart. (Safeway is not mentioned, so it apparently intends to keep accepting empties.)

The redemption center will be open seven days a week, 9 to 6 in the winter and 9 to 7 in the summer. It will be staffed during business hours. It will accept up to 350 empties per person per day via self-service. If you bring in fewer than 50 during business hours, someone will count them by hand. There will also be a “bag drop service” allowing people to just leave their empties and be credited on their BottleDrop account for the amount of deposits they get back.

As you may recall, the cooperative hoped to remodel a vacant former thrift store on Santiam Road, but the city council scotched that deal in February 2014 when it declined to make a requested change in the zoning code. At the time Kate Porsche at City Hall pledged to help the cooperative find a different Albany site. That’s what happened, Bertges told me.

A well-run redemption center will be a boon to people who hate waiting at those balky supermarket machines, trying to feed in empties one by one. Balky? Well, across the highway at Fred Meyer Thursday afternoon, two of the machines said “out of order.” A man working there told me the store was not replacing them in anticipation of the bottle drop across the street. (hh) 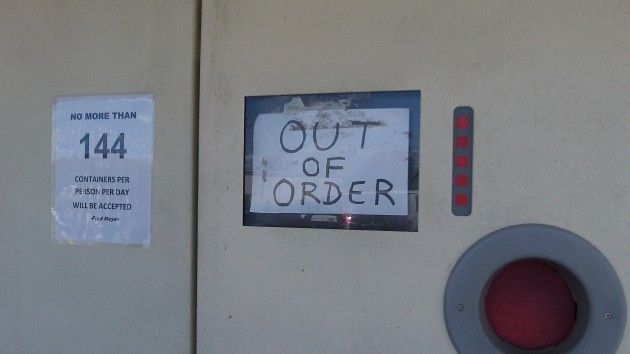 No more of this, if everything goes according to plan.


4 responses to “Albany to get its “BottleDrop””