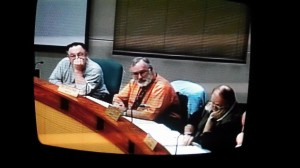 How the council looks on an old TV: From left, Kellum, Kopczynski and Collins during Wednesday’s meeting.

The Albany City Council jumped back into the medical marijuana issue Wednesday, asking its staff to draft changes in the city land use law that would ban dispensaries within the city limits. Councilor Bessie Johnson, who said several weeks ago she did not want medical marijuana dispensaries in Albany, prompted the council action, which was not on the Wednesday agenda.

Members voted 4-2 to have the staff initiate a change in city land use law that would prohibit the transfer of any drugs that are illegal under state or federal law. City Attorney Jim Delapoer had recommended that approach if the council wants to prohibit medical marijuana dispensaries. Councilors Dick Olsen and Ray Kopczynski voted against the move, but Rich Kellum, Floyd Collins and Bill Coburn backed Johnson’s proposal.

The legislature this year directed the Oregon Health Authority to write regulations to allow medical marjuana dispensaries. A state committee is preparing the rules, which are to take effect in April 2014. The state legislation was an attempt to give medical marijuana patients an easy and legal way to obtain the weed and to undercut illegal pot growers that operate under the cover of the medical marijuana law.

City Manager Wes Hare and others Wednesday said changing the land use rules was a long process that requires hearings before the planning commission and the council and thus would give all sides a chance to debate Albany’s proposed ban in public. Once the proposal is drafted, it will go to the planning commission first, probably in February or March. (hh)