Albany: This tax is not a tax 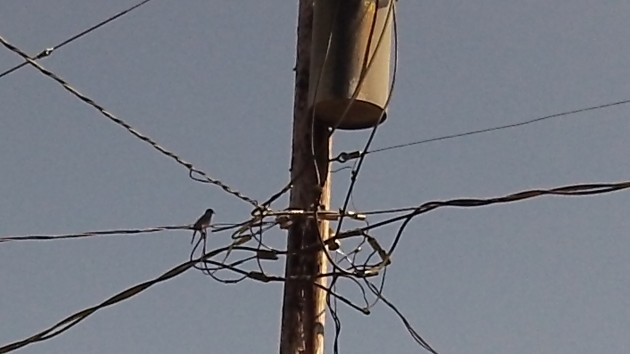 The jay perches there free of charge, but Pacific must pay the public “rent”?

Albany city officials say the electric tax they’re about to raise is not a tax. But the effect on ratepayers is the same: They have to pay it.

Two weeks ago, on July 8, the city council failed to complete action on adopting a new city franchise for Pacific Power because Councilor Rich Kellum voted no. The franchise calls for a 7 percent franchise fee, two points higher than the 5 percent privilege tax the city charges now. Lacking unanimous consent for a second reading of the ordinance at the same meeting, the council had to postpone final action until July 22.

On Wednesday, the council will consider a revised franchise ordinance. Since a revision appears necessary, looks like Kellum did the council a favor by not letting them rush this through.

Until now, the city has charged Pacific Power a 5 percent tax on its gross revenue in the city for the “privilege” of being allowed to sell electricity. As now proposed, the city will charge the utility 7 percent.

“The compensation provision of the franchise ordinance does not create a tax,” Finance Director Stewart Taylor and City Attorney Jim Delapoer say in a memo to the council. “Rather, it provides for compensation to the public for the benefits the utility obtains from access to the public right-of-way and for the inconvenience suffered by the public when the utlity must install, maintain or remove its facilities or equipment.”

This reasoning is even more contrived than that underlying the plain old city tax. The public suffers no inconvenience from electric facilities. We are inconvenienced only when the power goes off, and then we can’t wait for the repair crews to arrive. We consider their work a big help, not an inconvenience.

Under rules of the Public Utility Commission, the first 3.5 points of city charges on electric utilities are supposed to be included in the rates as an operating expense, and any additional amounts are to be itemized on customers’ bill, Karla Hunter of the PUC told me. (Outside cities, and for gas and telephone utilities the rules are different.)

Accordingly, Pacific has been including a 1.5 percent itemized charge on Albany bills. If the new deal goes through, the bills will itemize 3.5 percent. This illustrates that while the city pretends to charge the utility “rent” for the use of public space, the entire increase will in fact be borne by Albany households and other electric customers. (Not any federal customers though; the privilege tax ordinance exempts them, and presumably the franchise will too.)

Another twist: While charging Pacific a 7 percent fee, the franchise exempts the utility from the privilege tax. The council memo says the Albany privilege tax on electric service of 5 percent “needs to remain in effect to govern our relationship with Consumers Power Inc.” Three paragraphs later it says that “the current privilege tax arrangement with PacifiCorp is the only example of a unilaterally imposed privilege tax which we currently maintain.”

Questions: What is this “relationship with Consumers Power”? If Pacific really was the only privilege taxpayer, why doesn’t CPI pay it too?

All of this may seem like so much “Inside Municipal Baseball.” But there’s real money involved. The two-point hike in the city electric tax — or “rent” or “compensation” — amounts to about $930,000 a year, and the city budget for 2015-16 is counting on the cash. (hh)