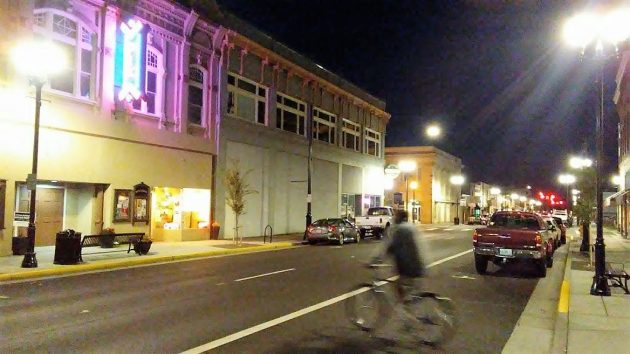 After dinner at Taqueria Alonzo on Friday night, I took a few minutes to walk around the downtown streetscape improvements whose completion the city of Albany will observe at noon today.

At noon Saturday, Oct. 13, that is. From 9 until 1, the Central Albany Revitalization Area (CARA) will staff a booth at the farmers’ market, and at 12 someone will cut a symbolic length of ribbon or construction tape.

CARA, the downtown urban renewal district, funded about $8.4 million of the cost of rebuilding — during much of 2017 and ’18 — the pavement and sidewalks on several downtown streets, along with planting new trees and installing lights and street furniture such as benches, trash cans, and bike racks.

The old water system under some blocks also was replaced, and this was paid for from the city’s water funds. The overall streetscape cost was estimated to be $10.6 million last May, and city officials say it has not changed significantly since.

I’ve heard lots of people say the streetscape work, especially the new asphalt on five blocks of Second and Third avenues plus Lyon and Ellsworth streets, has made downtown Albany look a whole better than it did before.

Myself, I’ve expressed a few quibbles about the unnecessary “catenary lights” hanging over the middle of two streets, and benches placed so that people sitting on them have a view mostly of blank walls. But I agree that overall the place looks great. It looks like the town cares about its core.

Now all we need is more people to populate the spruced-up streets, though on Friday night most of the parking spaces downtown were taken. Presumably people were inside the various restaurants and two theaters, in one for a movie, at the other for a play.

Another challenge made more urgent by the streetscape expense: Filling empty store fronts and buildings, now including the former Wells Fargo Bank. Whether CARA will play a role is not known. The CARA advisory board scheduled a closed executive session for next Wednesday to talk about “real property transactions,” but if anything develops along that line, the public won’t know for a while. (hh) 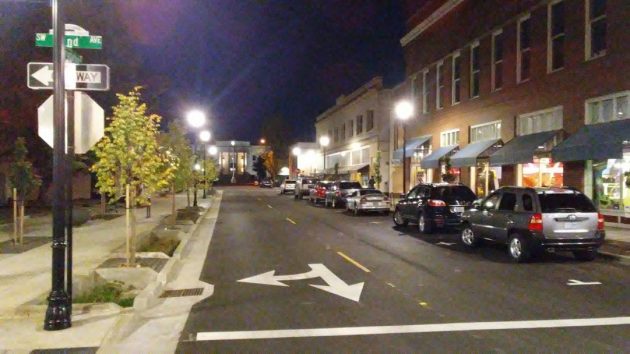