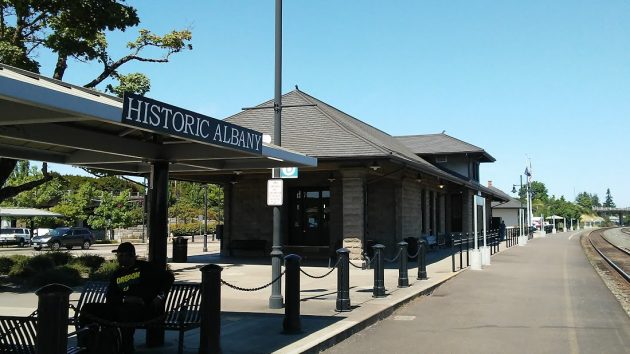 Visitors arriving by train are reminded right away of Albany’s important role in Oregon history.

Three things I noticed when I stopped by Albany Station on a bike ride this week, and one of them seems slightly odd for a train depot and transit center: You have to ask an Amtrak agent if you want to use the restroom. 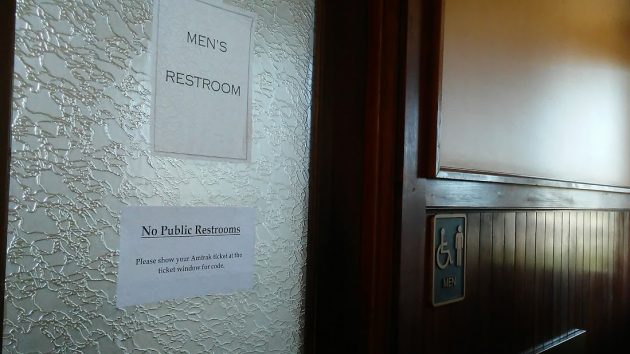 Somebody had told me about this, and sure enough, the sign says there are “no public restrooms” in this facility, which the public spent millions of dollars acquiring and then renovating in 2005. There are keypads on the doors, and you’re supposed to ask an Amtrak agent for the combination.

When I inquired about this, I learned that contrary to the small print, you don’t actually have to have an Amtrak ticket to get the combination. If, for example, you’ve been waiting to meet someone arriving on the Starlight, and the train is late and you kind of have to go, you can ask and get access even without a ticket.

I can see Amtrak’s problem, if they have to clean up after lots and lots of people, including perhaps the vagrants that hang out on the nearby path to Swanson Park. But the station is supposed to be a public transportation hub. Local and regional bus lines stop there and sometimes passengers have to wait to make connections. Accessible facilities are an absolute necessity. This situation needs to be fixed.

What else did I notice at the station? 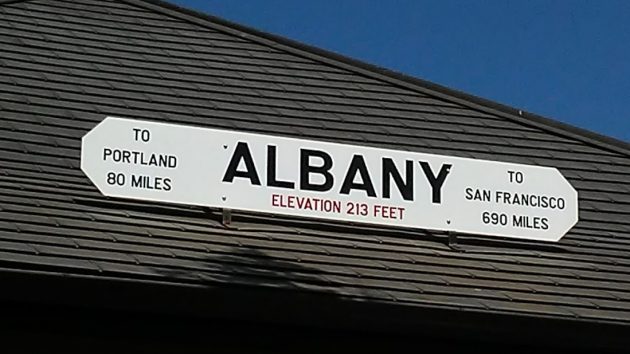 There’s a new “Albany’ sign on the southwest roof. The old one broke and fell off during the winter of 2015-16. The new one is of metal, but it gives travelers the same information as the old wooden one: The station’s elevation and the distance to Portland and San Francisco. The sign was made in the city shop, and it’s been up since October, I was told at City Hall. 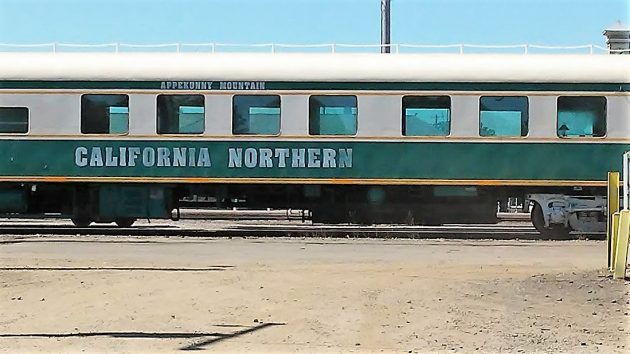 Third, across the yard I could see a fine old rail car that I first wrote about in October 2013. It was built by Pullman Standard in 1950 or ’51 (my sources differ on the year) for the Empire Builder, which ran between Chicago and Portland and Seattle. It is named — “Appekunny Mountain” — for a rock formation in Glacier National Park in Montana. The Portland & Western got it when its parent, the Genesee & Wyoming, acquired the California Northern in 2012. The car had a couple of roomettes and about 32 seats, and the California company called it its “business car.”

I rode my bike to the Portland & Western office on the other side of the yard. There I learned that the car is parked in Albany because it’s close to the rail company’s regional office in Salem, that the company occasionally uses the car for meetings, and that the Lebanon-based Albany & Eastern borrows it now and then for its train excursions.

See what you can learn by just looking around? (hh)