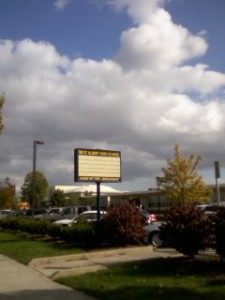 The existing sign at West Albany High: No message

In Albany, the city council is considering an amendment to the development code to allow changeable electronic message signs for schools and other institutions that happen to be in residential zones. I’m wondering why this is thought to be useful.

For one thing, existing lighted signs at schools can stay lit through the night. Under the proposal, if any are replaced by changeable signs, those would have to be turned off between 9 at night and 6 the next morning. So they would be dark and no one could see them at all.

For another, think about this. Message signs at schools and churches are intended to be read mainly by people driving by. But even at 20 miles an hour in a school zone, how much can you read? Maybe three or four words, and that’s it. If there’s a phone number, forget it. And now this proposal is to allow messages that can be changed at the push of a button — or with a keyboard, I assume. How useful is that going to be in terms of getting people to see, read and understand a message as they are going by in a moving car?

I imagine that changeable message signs aren’t exactly cheap, especially of the size being talked about. It’s one thing for them to be allowed, but considering their limited benefit, it’s hard to see why anyone would spend the cash — or raise it in the first place — especially when the message has to be turned off for nine hours out of every 24.