Bouncing along one of central Albany’s old residential streets, especially on a bike like in the video here, makes you wonder if the city will ever have the means to make repairs, now decades overdue. Monday’s council work session does not signal a solution any time soon.

For years the council has, from time to time, been prodded about street funding. In May 2018 it put on the ballot a 5-cent/gallon local fuel tax, and voters killed it by a ratio greater than two to one.

Monday the council was asked what if any steps the city should take next. The council’s answer to the city staff: Find out what other cities in Oregon, including all the ones closest to the mid-valley, are doing about street funding.

You can read all about the situation with Albany streets here, on the city’s website. Preparing that info is one of the “public outreach” measures the city administration has taken since the fuel tax defeat.

The gist of it — besides the information nugget that end to end Albany streets would reach San Francisco — is that the city figures it needs about $20 million to bring all its main streets up to a good condition. Then it would need $5 million a year to keep them that way. But that doesn’t include doing anything for local streets such as portions of Third, Fourth, Fifth and Sixth east of Lyon, streets that are pockmarked with patches and potholes, including potholes in the patches.

The city street fund gets about $2 million a year from various sources including the state fuel tax, leaving a yawning gap between what it gets and what it needs.

Mayor Sharon Konopa wants the council to enact a utility fee –charged on top of the city’s water and sewer bills — to support not just streets but also the police, fire and parks departments. Something like $10 a month was mentioned. Councilor Alex Johnson II worried about what that would do to residents who already can’t afford some necessities. Other councilors have said any such utility fee would have to go to the voters, just like the fuel tax did last year.

When streets are built now in residential developments, the developers pay the cost and get it back in the sales prices of new houses. But unless you pay assessments to a homeowners’ association, nobody sets aside money for fixing these assets when they wear out. So the Albany street situation will keep coming up decades from now.

As for dodging potholes, on Fifth and some of the others, people who can’t avoid those streets will have to keep dodging them for years to come. It’s a question of priorities. To the council and those who elect it, almost everything the city pays money for is more important than holes in the pavement on Fifth. (hh) 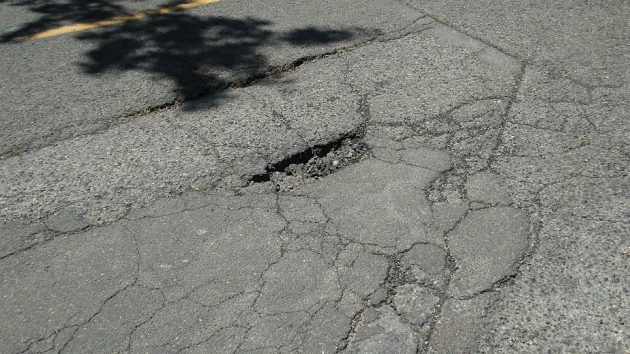 This place on Fifth looks like it has been patched before, but it didn’t last.