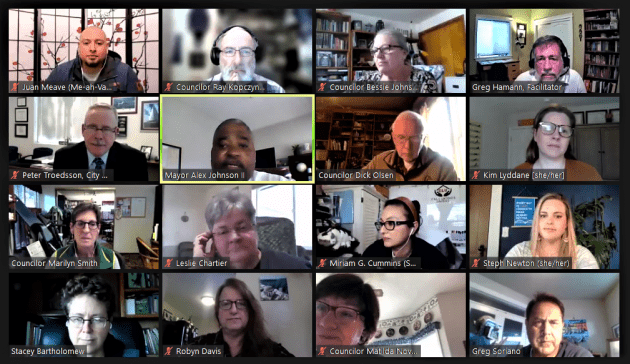 The city of Albany has had a “human relations commission” since 2007. Last year it blew up in discord, and now the city council is trying to write down what the newly constituted commission is supposed to do and why it exists.

Mayor Alex Johnson II and councilors have appointed six new members to join Stephanie Newton, the volunteer commission’s lone holdover member and chair. Monday they all met via Zoom for the second time to try to come up with language the council could use to amend the ordinance that created the panel.

They didn’t get anywhere but agreed a small group of council and commission members and city staff would give it a try.

In 2017, after some controversy, the council changed the city code to say the commission should “strive for actions that lead to positive and respectful relations committing to diversity, equity, and inclusion in the community.”

Last month, Greg Hamann, the retired president of Linn-Benton Community College, facilitated a council and commission conversation about the panel’s mission. As a result, he proposed language saying the panel was established “to foster and support an intentionally inclusive community, expanding the foundation of what we share in common by embracing the richness of resources that are afforded us though our diversity.”

What does that murky wording mean, Newton and Councilwoman Bessie Johnson wanted to know. But Councilwoman Matilda Novak liked it.

Juan Meave, one of the new commission members, said he wants the panel to be “empowered,” and he proposed that its members come up with wording. Councilor Johnson, however, wanted to know just what the panel would be “empowered” to do.

The city code still says the commission’s job “will not include the investigation or sanctioning of individual acts of unlawful or discriminatory behavior.”

The council set up this commission in 2007 in a compromise to calm an uproar over a private citizen’s proposal to name a section of Timber Linn Park for the Hispanic community.

Since then, according to its monthly minutes available online, the panel has listened to occasional complaints but mostly dealt with routine business such as reporting on events its members attended.

One time, years ago, the commission entertained someone’s proposal to have the city issue ID cards to undocumented aliens who could not obtain state driver’s licenses. Nothing came of that proposal.

Part of the panel’s charge has been to recommend to the council actions that would foster harmony, racial or otherwise. If they’ve ever made a recommendation of that kind, other than condemning the rare act of vandalism by some anonymous bigot, I can’t remember it. (hh)


7 responses to “Albany relations panel looks for a mission”