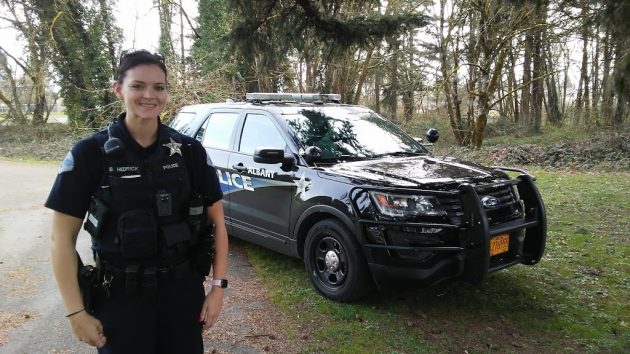 On March 14, Officer Breanna Hedrick was checking out a report in the cemetery near Waverly Lake.

You may not think so if you were the victim of one of the 1,743 crimes reported last year, but Albany turns out to be among the 100 safest cities in the United States. At least that’s what the people at Reviews.com concluded based on a study of crime statistics published by the FBI.

Reviews.com is in business rating consumer goods and services, everything from banks to kitchen knives and toothpaste. But it also posted a report it calls “2019 Safest Cities in the U.S.”

The organization says it compared the number of reported property and violent crimes in 454 cities with a population of 50,000 or more. Then it calculated a combined score for each city, along with the likelihood of becoming a victim.

In any case, Albany ranked as No. 63 on the review outfit’s list of safe cities, right behind Bend, and Corvallis was No. 68. As for the risk, chances of becoming the victim of a violent crime were one in 959 in Albany, and one in 768 in Corvallis.

Albany has long had a problem with higher-than-average property crimes, and this is reflected in the risk of becoming a victim in that category: One in 38. (It was one in 40 in Corvallis.)

Review.com adds a cautionary note: “Remember that these are just estimated predictions, however, and a variety of factors play a part in any city’s safety.”

The Albany Police Department has just published its annual report, and it shows an overall reduction in crime of nearly 26 percent since 2012.

In other crime categories, where the numbers are much smaller, aggravated assault stands out with a 48 percent increase, to 34 cases last year. But a change in reporting procedures in 2017 may have affected the statistics.

Dealing with and trying to prevent crime in a town of more than 53,000, Albany police have 65 sworn officers and 34 other employees. On a bike ride last month, a ran into one of the officers, Breanna Hedrick. Somebody had called in a report, and the officer had been checking an overgrown back corner of the cemetery near Waverly Lake. It turned out to be nothing, but checking it out was just part of working to keep people safe. (hh)

Based on comments below, the story has been edited.

2 responses to “Website lists Albany as a safe city”