Albany rain tax: How about ‘tiers’? 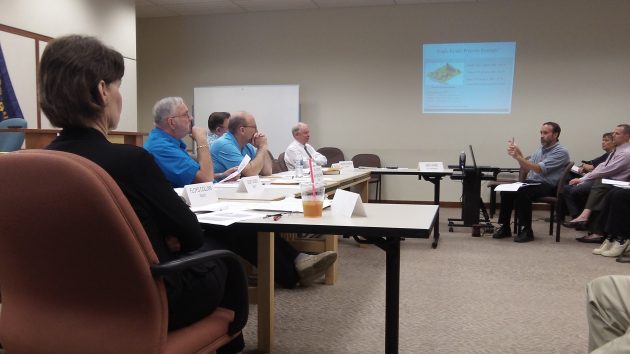 Depending on the size of the footprint of their houses, Albany single-family residential water and sewer customers would pay 50 cents more or less than the proposed standard $6.74 monthly storm water utility fee — or rain tax as I like to call it — under a three-tier system proposed to the city council Monday.

Combined with proposed sewer and water rate reductions totaling $4.13 for the average customer, the potential rain tax would be $2.61 monthly for 80 percent of single-family residential customers, or $2.11 for the 10 percent with the smallest houses, or $3.11 for those with home footprints in the upper 10 per cent.

Even though no vote was taken, the council seemed to agree with the idea of imposing the rain tax in three tiers, with the smallest houses paying 50 cents less and the biggest 50 cents slightly more. The council also seemed ready to accept a credit program by which non-single-family properties — such as apartments, commercial enterprises and industries — could reduce their rain tax bills by building city-approved facilities to reduce runoff. Councilors Bessie Johnson and Floyd Collins did not attend the work session, though Collins sent word that he favored a credit program.

The city staff has outlined the proposed storm water utility fee program for the council in a series of meetings over the last year. The council expects to adopt the rates in October or November, and the added amounts would appear on Albany water and sewer bills starting in March and April 2017.

The city wants to raise $1.75 million in the first year of the new program to spend on the storm water drainage system and to comply with tough new conditions of a discharge permit expected from the Department of Environmental Quality. The city staff has projected the annual revenue and spending on storm water would rise to $3 million in five years, with the monthly rain tax charges going up proportionately.

The city, backed up by a Supreme Court decision, says the new fee is not a tax because there are ways people can reduce their storm water fees. But homeowners will have no feasible way to reduce their fees, the way they can with regular utility bills by using less. To me, a fee is the price for a service you ask for, and a tax is something you must pay whether you ask for it or not. So to me, a rain tax this Albany plan will remain. (hh)