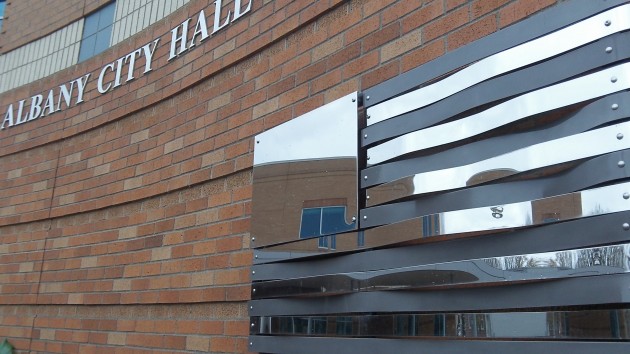 Albany most likely will join the ranks of Oregon cities with a stormwater utility fee (or rain tax as I like to call for the sake of brevity), judging by the city council’s reaction to the idea at a work session Monday.

The fee or tax would raise money toward the expense of managing the city’s storm drain and piping system and disgorging stormwater to various creeks and the Willamette River. The amount presumably will be established once the city sets a budget and figures out how much it needs and how much it can pass without running the risk of voter revolt. At present, the council was told, Albany pays for what limited work it does on the storm sewers with street and sewer funds and budgets zero dollars just for the drain system.

In cities in Albany’s population range (50,000 to100,000) the monthly charge per single-family home currently is as high as $13.61 in Springfield and as low as $5 in Bend, according to tables prepared by the public works department.

The council Monday voted 5-0 (Bill Coburn was absent) to direct the public works staff to begin work on preparing a stormwater utility program. It will likely take months to work out the details and run them by the council in work sessions. A council vote to enact the program could come late next year or early in 2017.

This is not a new idea, as Public Works Director/Engineering Jeff Blaine pointed out. He had found a 2001 memo by then Public Works Director Floyd Collins, now a council member, urging the council to prepare for a stormwater utility program and fee. Now the issue becomes more urgent because Albany figures it faces expenses for meeting the requirements of a new DEQ stormwater-discharge permit, expected in 2016.

There was talk Monday about providing credits against the fee for homeowners who take steps to lessen the amount of rainwater flowing from their properties into city drains. But Collins believes that with about 20,000 or more single-family lots, all a little different from each other, a system of incentives based on the amount of permeable surface would be a nightmare to administer.

Once enacted, the rain tax probably would be itemized on the city’s water/sewer bills. I wondered what would happen if people paid the water and sewer bill but refused to hand over the added tax for disposing of rain. We’ll get the answer as the program takes shape and before it comes up for a council vote. (hh)