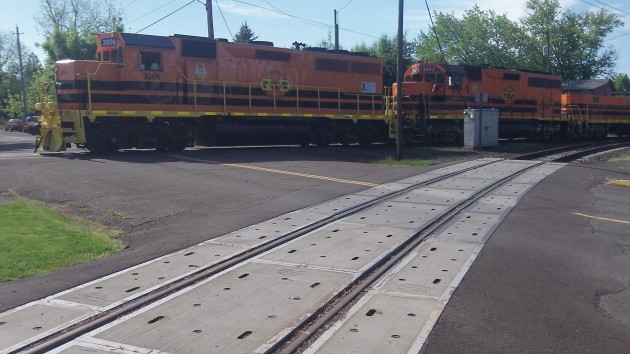 This new leg of the “wye” was finished but not yet in use in May, when the photo was shot.

All year long I’ve been wondering and occasionally asking the Portland & Western when the railroad would start using the new section of Albany track that the state gave it nearly $7 million to construct. Now the long-awaited occasion has come and gone, and I missed it.

I had asked about the completion date in emails to Kevin Haugh, the Salem-based general manager of the PNWR. In September he wrote back that it would be soon. And just now, in an email account I did not remember I had but opened by chance, I discovered a message from Haugh dated Dec. 17: “The Santiam Lead in Albany has been commissioned this morning and is now in service.”

This project, with a total cost of about $8.7 million according to ODOT Rail, included expanding the railroad’s Millersburg yard as well as building a section of track paralleling the Union Pacific mainline from Madison to beyond Main Street, a distance of two and a half blocks. It also resulted in the rebuilding of one leg of the wye, the Y-shaped layout that connects the Toledo branch to the east-west rail lines.

Under a contract signed in 2009, ODOT granted the railroad $6,990,516 toward the project under the ConnectOregon II program. Part of the goal was to eliminate delays that sometimes had freights coming off the Toledo branch (across the Willamette River) blocking several streets while they stood and waited for clearance to enter the Union Pacific mainline, which they had to do to get to either the Albany or Millersburg yards. The new track bypasses the mainline, and clearance from the UP is no longer needed for a left turn toward the Millersburg yard.

The rail improvements, it was hoped, would shift train-building to Millersburg and lessen the need to block Queen Avenue south of the Albany yard, a problem that has caused complaints ever since Queen became a main road generations ago. Will it work? I don’t know of any tally of Queen Avenue blockages — either number per day or average duration — so it will be hard to draw any firm conclusions, at least for a while. (hh)