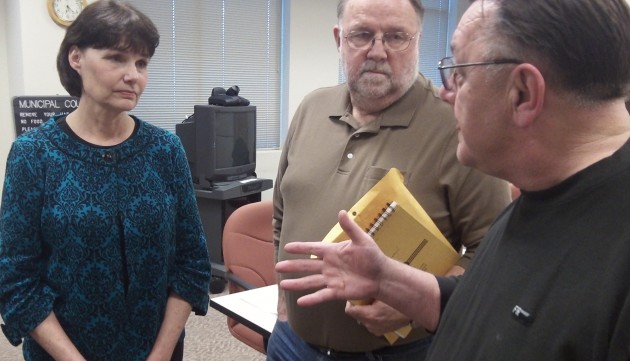 Whether to ban or regulate “marijuana facilities” in Albany may be decided Wednesday night, and for now it looks as though Mayor Sharon Konopa will cast the deciding vote in favor of more regulation but not a so-called “moratorium.”

The legislature last year authorized the Oregon Health Authority to license medical marijuana dispensaries starting this month, but last month it also authorized local government  to prohibit dispensaries entirely for a year, until May 1, 2015, or to impose “reasonable restrictions’ on them.

Albany’s council has talked about this for weeks, trying to decide what to do. Two councilors, Bessie Johnson and Rich Kellum, are for a ban, which councilors Ray Kopczynski and Dick Olsen have opposed. On Monday afternoon, the council held a work session on the drafts of two ordinances. One would impose the one-year ban; the other would place restrictions on the location of marijuana facilities plus impose an annual fee.

After the meeting, Councilor Floyd Collins told me he favored the one-year moratorium to give Albany time to see what if any problems develop in cities where dispensaries are allowed. But Councilor Bill Coburn came down on the other side. So now we have three council members for a ban and three against. If those positions hold on Wednesday night, it will be up to Konopa.

The mayor told me she was interested mainly in keeping marijuana stores away from homes and residential areas, as well as downtown. She’s pushing for requiring dispensaries to be at least 300 feet from residential zones. She’s for an annual city fee — $100 or $200 was mentioned. And she wants the police to be able to check on dispensaries at any time, a practice intended to keep out illegal “head shops.”

Backers of a ban point out that it would not keep medical-pot patients from buying it. They could go to Eugene, Corvallis or Salem, where dispensaries are likely to be licensed. Meanwhile, the Linn County commissioners today plan to give notice they plan to impose a ban on dispensaries, but this would have no effect inside cities.

TheAlbany council’s regular meeting starts at 7:15 p.m. Wednesday at City Hall. You can attend in person, or you can watch and listen online on the city’s website or on the Albany Comcast cable system. (hh)