Albany pot debate: Another round? 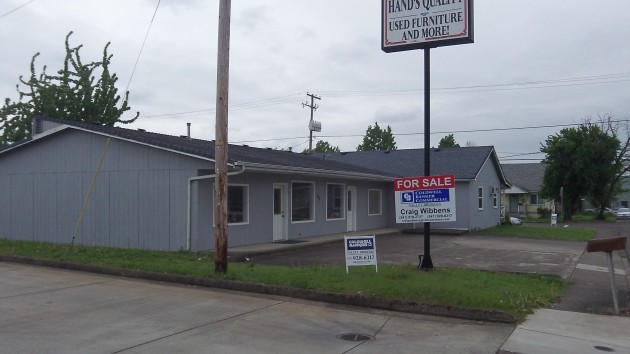 This is where Albany city law says Canna Kitchen is not allowed.

Albany may be in for yet another council debate about where to allow marijuana stores. It’s coming up partly because Canna Kitchen and Research LLC, which turns medical marijuana into various non-smoking preparations including ointments, would like to move from Ferry Street to an address where it is now prohibited.

Rhea Graham, the owner of the business, which has a state license as a medical marijuana dispensary, would like to buy a house and store combination at 750 Sherman St. S.E. The building, which is for sale, sits across Sherman Street from the Albany American Legion post, next door to a Chinese restaurant, half a block from Pacific Boulevard, and catty-corner from Hackleman Park. Graham would like to live in the residence half of the building and run her business in the other half, a former second-hand store.

But across Seventh Avenue, the zoning is residential. A city ordinance, passed after the legislature legalized dispensaries and later amended to cover all “marijuana facilities,” says such businesses are not allowed within 300 feet of property zoned residential and several other zones. But if a marijuana facility is in an industrial zone — as Canna Kitchen now is — the 300-foot exclusion does not apply.

Graham has asked the council to consider her request, but on Wednesday night, City Manager Wes Hare confirmed that under the present Albany pot ordinance, Graham’s business is barred from moving to the Sherman Street address. This prompted a brief discussion in which, among other things, Councilor Dick Olsen said he had a medical marijuana card and offered to show it to the group. Olsen said the 300-foot exclusion is unfair.

Mayor Sharon Konopa had insisted on the 300 feet because she wants to keep marijuana stores out of neighborhoods. In fact, she said, she would like to repeal the industrial-zone exemption because she got calls when a dispensary moved in at 34th and Lyon, across the street from residences.

City Attorney Jim Delapoer reminded everyone that Albany’s marijuana ordinance was a “home-grown” product and that it could be changed by four votes on the council.

Hare expects the council may indeed revisit the marijuana ordinance. How and when is not clear. But if you’ve seen the Canna Kitchen operation — quiet, law-abiding, harmless in every respect — it’s hard to defend the city law that says the corner of Sherman and Seventh is the wrong place for that kind of store. (hh)


8 responses to “Albany pot debate: Another round?”