Albany pot code up on Monday 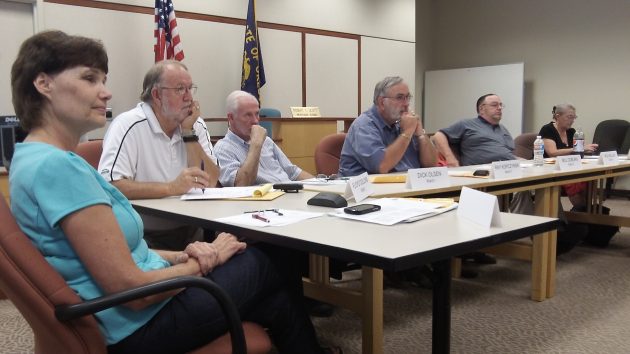 Albany council (shown in 2015, with Coburn hidden behind Kopczynski) faces another pot vote on Monday.

The Albany City Council could save itself time and trouble by relying on a mountain of state regulations regarding marijuana businesses. Instead, the council’s Monday agenda calls for action on a code amendment that the city staff believes would not survive a legal challenge.

The council meets at 5 p.m. Monday (Nov. 14) at City Hall for one of its regular November sessions, rescheduled because of the holiday later in the month. On the agenda is an ordinance to ban recreational marijuana businesses within 300 feet of any property zoned for residential, mixed, office professional, or neighborhood commercial use. In addition the code change calls for an annual city license fee to “defray law enforcement costs,” an amount that is unspecified but would be “determined by staff.”

In a memo to council members, City Manager Wes Hare says, “The city attorney, community development staff, and I have some strong concerns about the proposed ordinance… We do not believe the ordinance as proposed will survive a legal challenge, primarily because it is too restrictive.” The proposal is slightly stricter than existing city rules for medical marijuana dispensaries, according to the memo. Besides that, “I don’t believe staff can set fees.”

The council majority was set to adopt the measure last week, a day after Albany and Linn County voters repealed city and county bans on recreational marijuana businesses. But Councilmen Ray Kopczynski and Dick Olsen forced a delay in final action until Monday.

The Oregon Liquor Control Commission regulates recreational marijuana producers, processors, wholesalers, and retailers and has adopted scores of standards and requirements for licensing such businesses.

Among other things, pot retailers may not be situated within 1,000 feet of a public or private school or within any residentially zoned area. Minors must not be permitted on the premises. Pot consumption on site is not allowed, and neither is serving anyone under the influence. And if the merchandise includes edibles, a license from the Department of Agriculture is required as well. Moreover, marijuana businesses must not be “noisy establishments.” And drive-up windows are banned.

Licensed premises must have security including safes or vaults. All usable marijuana must be kept behind a steel door with a commercial lock. Licensees are required to file a security plan and must have an alarm system and a landline to call out in emergencies from their “limited-access” areas. Also required: 24-hour video surveillance inside, and outside within 15 feet of all doors or windows.

Sales are allowed only to persons 21 and older, and all must produce a photo ID. Hours are restricted to the period from 7 a.m. to 10 p.m.

And by the way, once applicants for retail, processing or wholesale licenses have satisfied the OLCC that they meet those and other conditions — including disclosing all persons with an ownership interest in the business — they must pay a fee of $4,750 to get the license, good for three years.

With all that already in place, pot stores would appear to be more secure and less trouble to neighbors and the police than your average convenience store or corner pub. It’s hard to see what additional safeguards the proposed Albany code could possibly achieve. (hh)


6 responses to “Albany pot code up on Monday”