Albany pot ban: One side campaigns 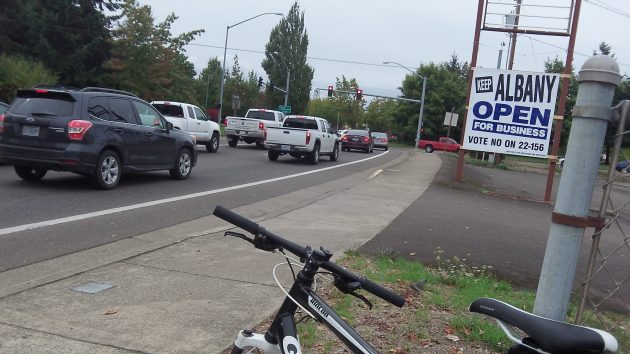 Traffic waits for a green light at the Santiam-Pacific junction, next to a somewhat enigmatic campaign sign.

To understand the big campaign signs put up by two Albany City Council members, it helps to know what “22-156” means. For those who don’t, the explanation is coming up.

“22-156” is the Linn County (22nd on the list of Oregon counties) designation of Albany’s ballot measure to continue the ban on various kinds of recreational marijuana businesses. The ban has been in effect for the past year, but state law required the council to put it on the ballot in the 2016 general election, which will end on Nov. 8. (The measure has the same number in the Benton County part of the city.)

“Keep Albany Open for Business” by voting no, as the signs urge, sounds shaky on the facts. Businesses covered by the ban — producing, processing, wholesaling and retailing marijuana for recreational use — are not open in Albany because, after all, they are banned. So there is nothing to “keep open.” Instead, defeating the measure would allow such businesses to start up in the very few places where zoning allows if they become licensed by the Oregon Liquor Control Commission. Medical marijuana dispensaries, of which Albany has a few, are not covered by the ban or the ballot measure.

The signs are the work of Councilmen Ray Kopczynski and Dick Olsen, who had them made and put them up. Both men have opposed the efforts by at least three other councilors and the mayor to restrict marijuana stores.

Olsen and Kopczynski are listed as directors of “Keep Albany Open for Business,” the campaign committee opposing the Albany ballot measure. It’s the only committee registered with the state Elections Division in connection with this measure, which may explain why I haven’t seen anything that looked like campaigning in favor of the ban. (For the mayor’s explanation see below.)

So far the “Keep Open” committee has been funded entirely by cash contributions of $1,000 from Kopczynski, $150 from High Tides Pipes & Tobacco, and an eye-catching $25,000 from The Genetic Locker Inc., a medical and recreational marijuana store in Boulder, Colo. (It’s eye-catching all right, but it didn’t catch my eye until the Democrat-Herald reported on it this week.)

On Sept. 6, the committee’s campaign finance report showed it had about $5,500 left. Most of its cash had gone to two firms on K Street in the District of Columbia, a street famous for housing Washington lobbyists; a company in Brooklyn, N.Y., for design services; and a firm in Portland. Albany’s Pride Printing was paid about $3,000, so that print job did indeed help support Albany business.

Why the out-of-town contributions and expenditures? The Albany committee’s treasurer is Jef A. Green of Portland, who also was treasurer of the Measure 91 campaign in 2014, which legalized recreational marijuana in Oregon and was heavily financed from out of state. The Boulder marijuana shop contributed $7,500 to the 2014 state campaign.

In an email, Kopczynski explained: “Earlier this summer, I was starting the process to set up a PAC and had a couple of ‘pizza’ meetings with folks to get started. One of the folks asked if I would be averse to having out-of-state money contribute to it. (At the time I had no information indicating there would be no formal group supporting the ballot measure.) I said I would be very happy to have contributions, knowing full well the push back I would get… As far as my personal money goes (and there will be more showing up as ‘in kind’), I’ve always believed that if I wasn’t willing to put my own name and money behind the issue, I didn’t believe in it strongly enough.”

What about the bit about keeping Albany business open? “Yes,” the councilor wrote, “I do believe we are kicking jobs, business, and taxes to Corvallis.” (hh) 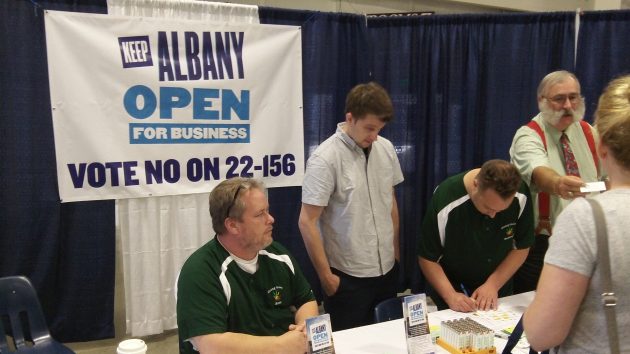 A booth at the Albany business exposition in September. Councilor Ray Kopczynski is the one with the biggest whiskers.

I asked Mayor Sharon Konopa about any campaign in favor of the continued ban. Her emailed reply:

“No, there isn’t one. I was hoping with the voters getting the opportunity for a second look they could decide without a campaign influencing their vote. Now we have out of state money paying for a misleading campaign to influence the voters to mark no on their ballot. Disappointing to me, because now I will never know the true views of Albany voters. Many voters thought M91 denied someone their medicine and voted yes for the measure. Now this campaign is using the same message to sway votes, yet we have four dispensaries for medical currently. Also, their message that Albany is not open for business is misleading. How does that look to people visiting our community?”


16 responses to “Albany pot ban: One side campaigns”