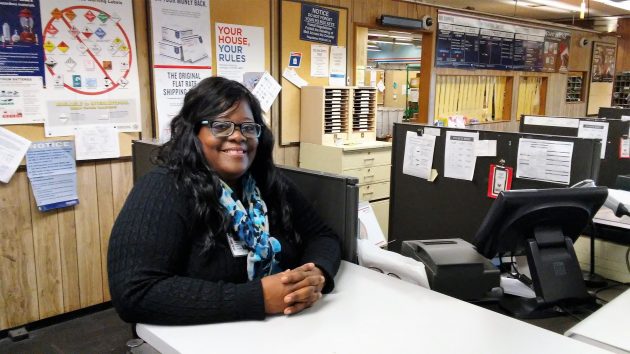 Postmaster Pamela Moody at the Albany Post Office on Monday morning. She sees no reason why the office should move.

Albany’s new postmaster has been hearing about the idea that the post office should move. But she has a question: “Why should we move when we own this building?”

Pamela Moody, 55, assumed the postmaster’s job in April. She joined the Postal Service after serving in the Army in posts all over the country as well as Germany and Korea. Her previous assignment as postmaster was in Seminole, Texas. I stopped by last week to meet her and ask her about the notion that the Albany office might be persuaded to move from the downtown block it has occupied since 1963.

A work group formed by Mayor Sharon Konopa has been discussing other possible locations for the post office. After the group’s meeting a week ago, city officials said they would work up proposals involving two sites that could then be presented to the United States Postal Service.

In my conversation with Moody, she stressed that any such proposal would have to be considered not by her but by higher-ups in the Postal Service, at the district level or higher. It would involve various committees and feasibility studies and would take all kinds of time.

But really, she wondered, why would her agency even consider such a proposal when it owns its Albany building and, on the national level, is not looking to incur additional and needless expense.

What if, I asked her, the city or somebody acquired a new site, built an office and turned it over to the Postal Service at no expense to the service, as unlikely as that sounds? That just would not happen, she thought, and even then it might not make sense for the office to move. All the postal routes in the Albany area are arranged to be served out of the present building and would have to be reconfigured, apparently not a simple thing.

The need for additional parking downtown seems to be driving the mayor’s idea, especially once the Albany Carousel opens this summer across First Avenue from the postal block. The postmaster suggested the city might look at other properties downtown if it wants to provide more off-street parking. And anyway, she wondered, did anybody consider the need for parking when the carousel’s site plan was approved?

I was surprised to learn that nobody from the city had been in touch with Moody during the month she has been on the job. The mayor has said she wanted to wait until she had a proposal to present. But you’d think the work group might have reached out to the person in charge of a property whose possible move had been the subject of several public meetings.

I had one more question for Moody: How about putting back the curbside drop box on First Avenue that was removed so the city could rebuild the sidewalk and street there as the first phase of the downtown “streetscape” project? The postmaster says she’ll wait until the street is finished before evaluating whether the box can safely be replaced where it was. If not, dropping off letters at the post office will remain as inconvenient as it has been for the last few months. (hh)


6 responses to “Albany postmaster: Move? Why?”