Albany police report on use of force 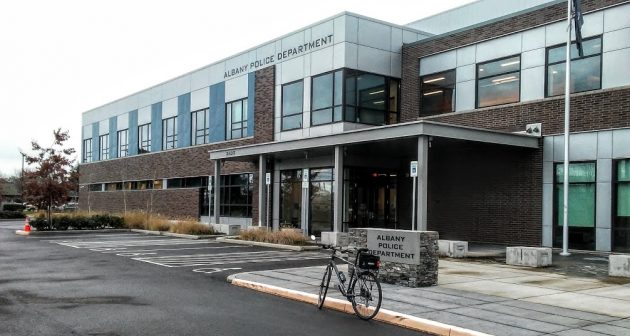 The Albany Police Department headquarters the way it looked one day last January.

With police shootings in the national news, it may be instructive to take a look at what the Albany police have reported in regard to their officers’ use of force.

We’re in luck, because the department has posted two reports on that subject on its website here.

The first covers all of 2019 and compares the data to 2017 and ’18. The second is the department’s first quarterly report, covering the first three months of 2020.

It’s not that they don’t have occasion.

In one of the incidents summarized in the the 2019 report, officers were called to a domestic disturbance involving a “female subject,” her boyfriend, and his brother, a juvenile.

One thing led to another, and the juvenile got one of the officers in a headlock. Fighting for breath, the officer struggled to get free. When that failed, he “drew his service weapon and pointed it back towards Subject C and was able to tuck his chin to get some air and yelled that he would shoot.”

That took care of it, apparently, and the brothers were subdued and charged.

Of the 290 persons against whom force was used in 2019 — can we quit calling them “subjects” please — 248 or 86 percent were white. Twenty-two or 8 percent were Hispanic, 16 or 6 percent were black, and two each were listed as Native American and Asian/Pacific Islander.

The city has announced a live Facebook conversation on “race and policing in Albany” for 1:30 p.m. Wednesday, June 17. The participants are Police Chief Marcia Harnden, Linn County District Attorney Doug Marteeny, and Heather Carmichael, a pastor at The Grove church in Albany.

If you plan to take that in, you might want to go over these use-of-force reports first. (hh)


33 responses to “Albany police report on use of force”