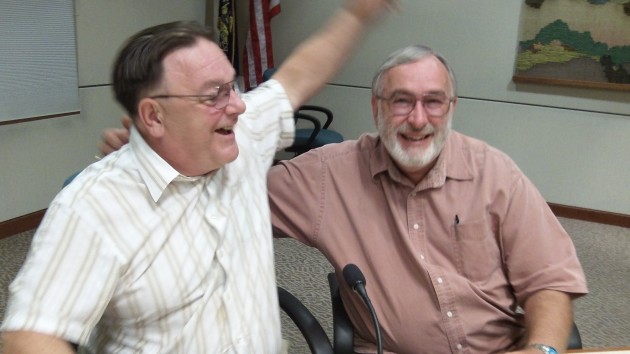 Councilors Kellum, left, and Kopczynski are on opposite sides of the marijuana issue, but they’re cordial about it.

The vote was a procedural one on an emergency ordinance “declaring a ban on the sale of recreational marijuana by medical marijuana dispensaries.” The ordinance will come up for final action, its second reading, on Sept. 23, when the same four councilors likely will pass it. The measure has an emergency clause, meaning it will take effect immediately, in plenty of time to stop sales before they could begin in October.

The 2015 legislature allowed dispensaries of medical marijuana to sell small small amounts of recreational weed from Oct. 1 through the end of 2016, by which time the state will have licensed recreational pot retail stores. But it also allowed cities the option to ban such sales. The Albany ban would be in effect until the end of 2016.

The prohibition ordinance was not on the agenda Wednesday, but Councilor Rich Kellum called it up at the end of Wednesday’s session. He said it had been drafted only that morning. Kellum voted for it along with Bill Coburn, Floyd Collins and Bessie Johnson. Councilors Ray Kopczynski and Dick Olsen voted no.

Albany has four or five marijuana dispensaries open to holders of medical marijuana cards. I don’t know if any of them planned to sell recreational pot as well.

The council made no decision on, and didn’t even discuss, a possible ban on recreational marijuana retailers, which the state expects to start licensing some time late in 2016. But Kellum suggested the council may want to consider requiring pot stores to be at least 1,000 feet from schools and other places where children and teenagers hang out. (hh)

In nearby Lebanon, the city council also acted on the marijuana issue Wednesday. Mayor Paul Aziz told me the council voted to allow medical dispensaries in Lebanon and directed the staff and city attorney to work on regulations. The council also voted to ban recreational marijuana stores, as Sweet Home and Brownsville have done, and this ban will be in effect until the city’s voters either confirm or overturn it in a referendum in the 2016 general election, as the legislature provided. (hh)


26 responses to “Albany: No recreational sales at medical pot dispensaries”