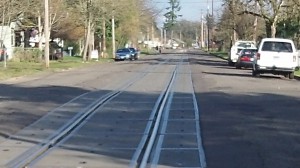 This is the track covered by the agreement between the city of Albany and BNSF.

A bit of long-awaited Albany news, with an update below: After seven years of trying, including five years of litigation, the city of Albany and the Burlington Northern & Santa Fe Railway Co. have reached agreement on what to do about the railroad track going down the middle of Water Avenue near the Willamette Riverfront.

City Attorney Jim Delapoer got confirmation of the final details in the language of the agreement via his smart phone while he attended the city council’s work session Monday afternoon. Shortly afterward he announced the agreement. The deal settles a lawsuit the city had filed to compel the railroad to renew its Albany franchise to use Water Avenue, a city street, for a seven-city-block segment of track.

(Update: On Wednesday night, Feb. 13, Delapoer said he had received the text of the agreement from the railroad and still had to review it, but he was confident the agreement was in place. The city council postponed action on a new franchise covering the railroad’s track in Water Avenue.)

The rail line runs from the Millersburg yard south to Eugene and is operated by the Portland & Western Railroad, which leases it from BNSF. The agreement opens the way for the track in the street to be repaired and for the city to fix the badly deteriorated pavement at the same time. But  the timing of the repairs was not clear and was not announced.

The tracks have been in the street for more than a century, and an old city franchise allowing this arrangement expired in the 1980s. Seven years ago the city attempted to re-establish a franchise, but negotiations went nowhere, and the city filed suit. The suit has been dormant while negotiations continued. Once the new agreement is signed, the city will dismiss the lawsuit.

As part of the agreement, the railroad will give the city two parcels of real estate, a sliver near the Albany Carousel building and a larger piece in the middle of the proposed Edgewater Village housing complex on the riverfront north of Water Avenue. Also, the railroad will pay the city $35,000.

The new 30-year franchise — separate from the agreement but ready to be acted on now that the accord has been reached — goes to the city council for approval Wednesday. It also spells out the railroad’s and city’s portions of costs if ODOT-Rail requires any of four named crossings on the Water Avenue line to be improved with lights and gates.

Freight trains on Water travel about 10 miles an hour or less. Although the new franchise allows it, the track is not used for passenger traffic. (hh)