Albany mural: Who painted it and when 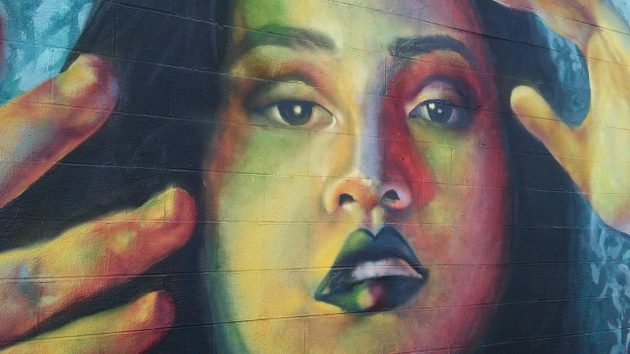 You wonder what she was reacting to with this expression and these gestures.

On Dec. 8 I left you hanging about the striking mural I had discovered on an out-of-the-way Albany wall. I didn’t know anything about it then. Now I’ve learned at least a little.

I had seen this work of art for the first time that day when I stopped the bike at the grade crossing of the Lafayette Street trestle on Second Avenue to watch a train go by. The giant painting is on the east-facing brick wall of a nondescript shed on the north side of the street.

Because the street goes over a hump to account for the tracks, drivers on one-way Second can’t see it even if they happen to look in the mirror. The only way to see it is from a passing freight train. Or to stand at the crossing and look west, which is what I was doing.

It wasn’t hard to learn more about this piece of unexpected public art on an obscure Albany wall. In the upper right-hand corner, there was the artist’s signature complete with a web site address: “EH eh-art.com.”

The EH stands for Eileen Hinckle, currently based in Corvallis, where according to her website she’s an artist in residence at the Corvallis Arts Center. Her site says she spent seven years in South America and has painted murals on three continents.

I emailed her with questions about the mural I had seen, and she was kind enough to respond

“I chose that wall for a mural mainly because it was in front of the train tracks and I love trains,” she wrote, “so it’s great to see the mural ‘interacting’ with its environment.”

She had painted the piece this past August, she told me. Abbey Sacks, a photographer from the Seattle area, made a short video of the process. In it, the artist talks about the project. I watched it here, and you can too.

I wondered whether the young woman on the wall, crying out and gesturing in surprise or amazement, represents an actual person. Yes, Eileen told me, she’s “a real person named Hut.”

On Facebook I found postings by Hut Ugalino, who says she lives in Seattle. Her page includes a photo of her in front of the Albany mural.

On Eileen Hinckle’s website you can admire many of her other murals, all of them stunning in color, composition and size. One of them runs up the side of a four-story building.

The one by the tracks off Second Avenue isn’t that grand, but it’s big enough. It’s also interesting to look at and — in my case anyway — makes you want to learn more. (hh) 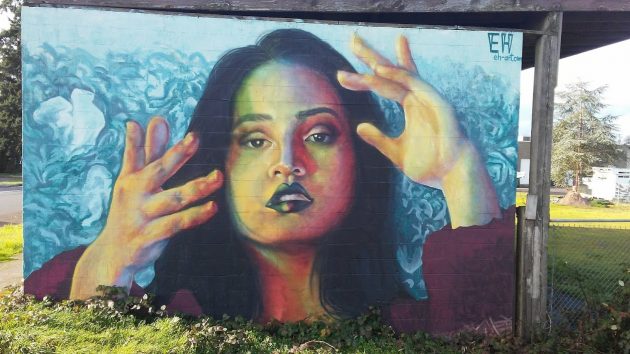 The mural covers the brick wall on the east side of this shed.

6 responses to “Albany mural: Who painted it and when”