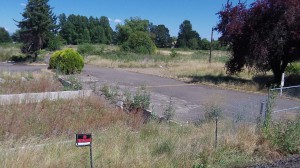 Lowe’s site includes wetlands, even though you don’t see them.

Lowe’s appears to be about to get started on its long-awaited home improvement center at Ninth Avenue and Oak Street in Albany. And as usual, regulatory compliance has to be obtained.

As reported by city Public Works Director Mark Shepard, a consultant for Lowe’s has asked the city to sign a statement that the project is compatible with city land use plans, which it is. The statement is required for a permit the company needs from the Department of Environmental Quality for work in wetlands.

What, you say? Wetlands on what used to be the site of some apartment houses and a big unimproved parking lot? Yup, apparently so, even though the site is bone-dry this time of year. Nonsensical wetlands regulation is an old story by now, but it’s still aggravating when it involves no actual watery habitat at all.

Meanwhile, the Lowe’s engineers have let the city know they would like to start discussions about the preliminary grading and wetlands work that the DEQ permit will allow. They want to be ready for doing the site work early next year.

You may remember that under a development agreement with Albany, Lowe’s must have the store open by the last day of 2014. It’s been years since this project was announced. Looks like now it may actually come to pass. (hh)

From Carolee Gascoigne, via Facebook:  I’ll believe it when I see it.