Albany log yard: The story behind it – Hasso Hering 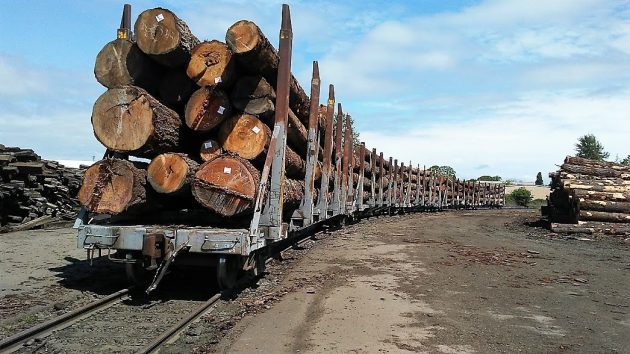 These rail cars are headed for Coos Bay, from where the logs will be shipped to China.

Sawmills disappeared from Albany decades ago, but a part of the business has returned in the form of a small company that buys logs and resells them to mills in Oregon and as far away as China.

The operation of Oregon Forest Grown Products LLC is centered on part of the Union Pacific yard south of Ninth Avenue and east of Jackson Street. It has been there for a year and three months, and now the business is really taking off, the owner, Jerald Bush, told me by phone today from his home in Kings Valley.

Stacks of big logs on the site prompted questions from readers, and on a bike ride Sunday, I took a look. No reloading was going on, but five rail cars sat on a siding, ready to go. Bush told me they were scheduled to leave as early as Monday night, headed for Coos Bay. The logs — hemlock, spruce, Doug fir and white fir — are going to China.

Bush, 64, went to Philomath High School and started logging when he was 14. His friend from school operates the Albany reloading yard, and his daughter runs the office nearby.

The company buys logs from all over western Oregon and resells them to the best markets. Some go to Oregon mills, such as Roseburg Forest Products. Big logs, Bush told me, usually go to Coos Bay for export to China. There, some of the wood is used for concrete forms but most of it becomes the raw material for coffins. Oregon mills no longer have a use for logs that are too big for their machinery or too rough to yield much salable wood.

Strings of rail cars loaded with the big logs usually leave the Albany yard once a week. (hh) 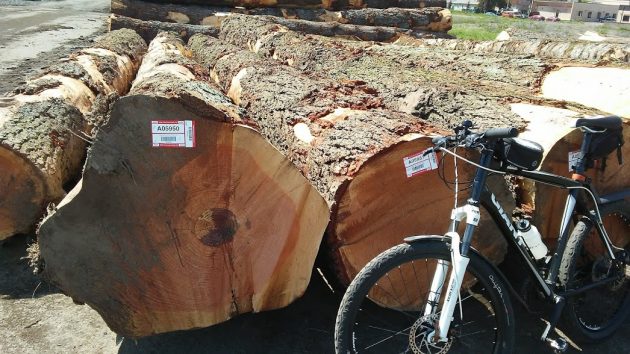 Logs waiting to be shipped at the Albany yard of Oregon Forest Grown Products LLC.

6 responses to “Albany log yard: The story behind it”