The file on the Ellison land use request at the Linn County planning office.

The Albany City Council has voted to try to block a land division outside the city limits approved by the Linn County Board of Commissioners. The case is of interest to anyone who owns and might want to develop property within the city’s “urban growth boundary.”

The council went into an executive session, closed to the public, at the end of its Wednesday night regular meeting. Video coverage of the meeting was turned off. With video remaining off, the council then reconvened in open session and without further discussion voted 5-1 “to file notice of intent to appeal” the county’s decision on the land-use matter, but also “to enter into discussion with the county to come to a resolution” in that and similar disputes.

The case concerns the county board’s approval of a land division of 16.7 acres on Knox Butte, east of Scravel Hill Road near Linnwood Drive, into two parcels of 5 acres and 11.7 acres. The land, owned by Monty and Linda Ellison, is about one mile northeast of the city limits but within Albany’s urban growth boundary.

The two parcels, undeveloped and partially forested, would be intended for one house each. The city staff has objected on the grounds that single homes may not fit the eventual zoning district there if it’s ever annexed. The owners maintain that residential is the only logical use for the hilly terrain, and if annexation ever does become a possibility, the two parcels are large enough to be further developed. They also point out that Albany’s comprehensive plan shows the area as residential.

Albany planning and public works officials worry that land divisions outside the city limits will cause complications and additional expense in providing utilities if and when such lands become part of the city. Albany and Linn County have an intergovernmental agreement that gives the city some say over land use actions in the urban growth boundary, but they disagree on exactly what the agreement provides. The county approved the Ellison application over the city’s objection.

At a council work session Monday, Chairman Roger Nyquist of the commissioners and former state Sen. Frank Morse urged the council to support the Ellison request. Morse said that if the council approves an appeal, “it would essentially be endorsing a no-development standard within the urban growth boundary.”

If the council follows through, this would be the second case it takes to the Land Use Board of Appeals. Last year, LUBA upheld the city’s stand and blocked Daniel and Sheila Headings from dividing a 2-acre parcel on Scravel Hill Road, three-tenths of a mile outside the city limits. That request, too, had been approved by the county commissioners over the city’s objections.

State law says jurisdictions have 120 days to act on land-use requests. The Ellisons had extended that deadline once, but the extension was about to run out.

Rich Kellum was the only council member to vote no on the appeal motion Wednesday. Since reporters are obligated not to report remarks during executive sessions they attend, I asked Kellum to explain his vote afterward. His response, in part:

“The commissioners took this up to begin with because 120 days were about to happen. The 120 days was up on Feb. 1.  Mr. Ellison could go to court and get his way because of that.  So, the commissioners passed the request. A city person whom I respect expressed concern to me that I should make sure the council knew of the time crunch so they would not feel slapped in the face by the decision. I pointed out to the council that if we take the county to LUBA, that is a form of attack. They didn’t seem to understand that or they didn’t care. My opinion is, if you want to solve a problem you do not spit in the face of the person you are trying to negotiate with. That thought fell on deaf ears.” (hh) 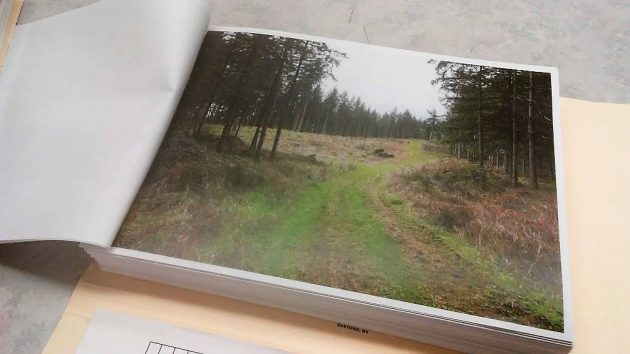 One page in the thick Linn County planning file on the Ellison request for a land division on Knox Butte.

13 responses to “Albany, Linn County spar over land use”