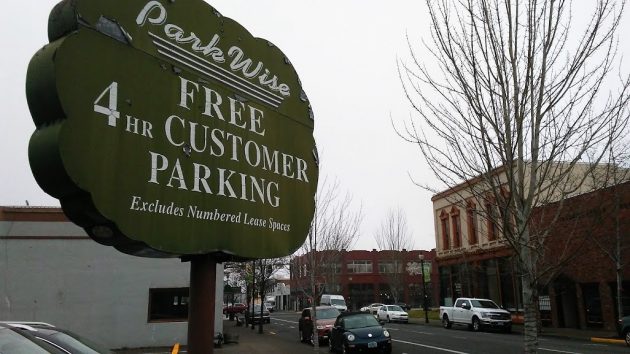 At Ellsworth and First, one of the city’s downtown lots where parking is free.

The Albany City Council thinks the city would benefit from a downtown parking study, and it has commissioned one at a contracted cost of no more than $42,803.

The council took the action last month, on Jan. 9, as the Albany Revitalization Agency, the entity governing the downtown urban renewal district known as CARA. The vote was 6-1. The only no vote came from Councilman Dick Olsen. He didn’t give a reason at the time. But I asked him Sunday, and he said it was because the consultant had expressed doubts about the usefulness of parking structures. Olsen thinks a parking structure could be built in such a way as to fit in with downtown.

There are no plans to build a parking garage, but the CARA urban renewal plan lists two such projects, one near the Courthouse and City Hall, the other south of Water Avenue and east of Lyon.

For the parking study the council or ARA hired Rick Williams Consulting of Portland. Williams had talked to the CARA advisory board about this last fall. He especially emphasized the need to collect data.

In his proposal to the city, Williams said his study would yield a final report in about 12 months. It would be based on detailed inventories of available public and private parking stalls as well as actual counts of how many cars — identified by license plates — are parked for how long in which spaces. Along the way there would be meetings with “stakeholders” and city committees, as well as “outreach” to the public. The end result would be a “detailed parking management plan in a near, mid and long-term format.”

Albany owns several parking lots downtown. The city delegates its parking management, including enforcement of parking time limits on the streets, to the Albany Downtown Association and its ParkWise program. How that program works you can check out here.

CARA’s 2001 urban renewal plan estimated the costs of the two parking garages in the plan at $2 million for one and $1.5 million for the other, which sounds unrealistic today. Any chance the Williams study will encourage CARA to pursue either one of those projects? We’ll find out when the study is done and the results are handed in. (hh) 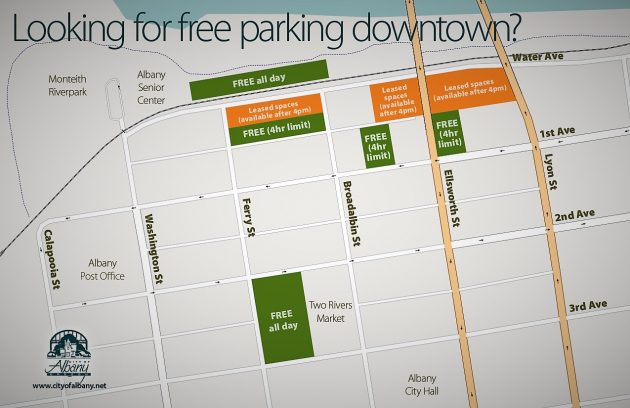 This is the ParkWise map of free public parking lots in downtown Albany.