Albany issues — a chance to unload, and learn 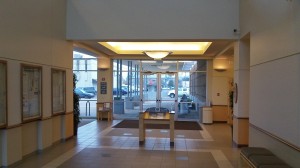 The lobby at City Hall, where an open house is coming up.

If you are among those who grumble about the city government in Albany, a chance to talk to city officials face to face, without the formality of a public meeting, is close at hand. An open house is coming up at City Hall on Monday, Dec. 2, from 5:30 to 7 p.m.
If past occasions like this are any guide, all the city departments will have displays set up, or tables, and employees will be on hand to talk to anyone who comes by. This may not seem all that riveting, but it’s instructive nevertheless. More important, though — once you’ve seen the demonstration of how well a police dog can sniff out drugs — is that members of the city council most likely will be there. So will the mayor.

And you can talk to them about anything that’s on your mind. You can quiz them if, for example, you’re concerned about water rates, or why your street is falling apart and when it might be repaired, or what’s next in downtown urban renewal, and why, or how the rates are set under the city’s trash disposal franchise. Chances are you’ll learn something.

Or — and this might be most helpful — you can tell council members why you voted the way you did on the bond issue for rebuilding the downtown fire hall and building a new headquarters for the Albany police. The council members have been wondering about that, especially, and the open house is one opportunity for individual citizens to fill them in (hh)


2 responses to “Albany issues — a chance to unload, and learn”