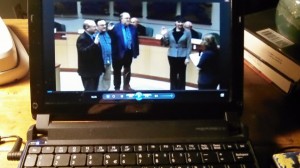 You could have watched Albany council members starting new terms being sworn in on Wednesday night. Soon, council meetings will also be live on cable channel 28 in Albany.

A big question still hangs over the upcoming special election in Albany, according to the city council. But the council won’t seek to have it resolved until after the vote.

As you remember, the city of Albany scheduled a special election for March 12 on two initiatives successfully sent to the voters by city resident Tom Cordier. The more significant of the measures would limit the city’s “debt” — not further defined — to the amount the city had last Feb. 28 unless an increase is approved by the majority of city “electors in a primary, general or special election.”

Mayor Sharon Konopa and City Attorney Jim Delapoer believe that, based on the definition of “elector” in state law, the initiative would require an absolute majority for any debt increase. That would mean yes votes from more than half of all the city’s roughly 25,000 registered voters. And if that’s right, the initiative itself would have to be appoved by an absolute majority as well in order to take effect.

Cordier, the sponsor, disagrees and says it requires only a majority of those voting. And when someone last summer filed an election law complaint against him charging him with lying on that point, the secretary of state found the complaint unwarranted, in effect backing up Cordier’s claim that only a simple majority is required.

On Wednesday night (Jan. 9), the council voted to ask a court for an interpretation, but only after the election, and only if the initiative has received a simple majority of yes votes. The rationale: A court would not take the case until there is a concrete issue. Also there is this: If an absolute majority approves the measure, it’s approved period. If any kind of majority rejects it, it’s dead and nothing further is required. But if a simple majority approves it, the council then has to determine whether the measure was approved or fell short of what’s required.

To voters in that election, this may all seem like unnecessary mumbo-jumbo, as it does to Cordier. He asked the council Wednesday not to pass the resolution but to have the city attorney meet him at the courthouse in the morning to try to get an answer from someone. The council ignored him — as it has done before, which prompted this whole mess in the first place. Cordier says he may file something with the circuit court on his own, seeking a declaration that his interpretation of the majority question is correct. He won in court before, when Judge Tom McHill threw out the ballot title written by the city attorney. If Cordier files something with the court now, he may win again. And for clarity on the majority issue, voters then would have him — not the city council — to thank. (hh)

The commentary prompted a reponse and a rebuttal. Please read on. (If you have any comments on this issue or what should be done about it, please send them to hassohering@gmail.com.)

Albany Councilman Ray Kopczynski responds:  “Cordier, the sponsor, disagrees and says it requires only a majority of those voting. And when someone last summer filed an election law complaint against him charging him with lying on that point, the secretary of state found the complaint unwarranted, in effect backing up Cordier’s claim that only a simple majority is required.” The Sec. of State didn’t find the complaint unwarranted, only that there was not enough information (at this time) upon which to make a decision. That’s different than “unwarranted.”

“Cordier says he may file something with the circuit court on his own, seeking a declaration that his interpretation of the majority question is correct.” Isn’t that *exactly* what the city is attempting to do?  As stated, I will be very surprised if any court/judge would make any ruling until after the measure fails or passes.  If the measure fails “straight up,” there’s no basis from which to make a ruling — so we’ll never know.  If it passes; there is that basis.  This happens all the time vis-a-vis ballot measures.  There’s nothing unusual about the process.

“He won in court before, when Judge Tom McHill threw out the ballot title written by the city attorney.” I disagree.  He did not “win.”  The judge threw out *both* titles as written and wrote his own.  In addition, the judge also stated: “Clearly, the City consulted with bond lawyers for assistance in trying to capsulate the idea that there would be limitations in the city’s capacity to borrow money if the measure passes as an effort to describe the initiative’s ‘major effect.’  While such might be the result of passage…” [my bold]  So, while admitting he could not (at this time) make a legal determination about these specifics, the judge had no qualms about stating his opinion.

As you’re very well aware, words DO matter.  As such, I believe Mr. Cordier knows exactly what the potential end result of passage of this will be, and is exactly why he wrote the two ballot measures using different voting requirements.

From Tom Cordier: The secretary of state’s disposition of the untruthful charge never uses the language Ray claims. Ray quotes “not enough info (at this time).” Their letter states: “Not finding a violation of election law, the Elections Division determines this investigation is closed and does not intend to pursue this matter further”.
About winning the case, Ray failed to include the statement following the one he quoted. Here is that quote. “In ‘explaining’ the potential effects of passage ,it
appears to this Court that [Delapoer’s] proposed title editorializes where it should be more concise and impartial.” Indeed we did win, to the point where the City was required to refund Court costs to the petitioner.