Albany issue: The council and the public 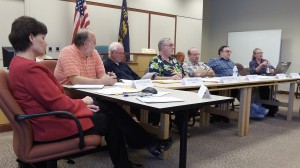 The Albany council at a work session last spring. Work sessions are public and usually held at 4 p.m. every other Monday at City Hall.

At a work session on Monday, the city council in Albany talked at length about ways of encouraging greater public engagement in city issues and decisions. (The only agenda item was evaluating the city manager. The council praised Wes Hare for doing a great job and gave him a 3 percent raise, making his base salary $131,795 and his total compensation including deferred pay and benefits upwards of $178,000.)

I was the only member of the public there. As behooves an observer and reporter, I kept my mouth shut. But if the occasion had allowed it, here is what I would have said about efforts to stimulate public engagement:

Forget about trying to stimulate public interest in subjects that are inherently boring, such as planning and budgeting, especially since the public has learned from experience that in the modern regulatory state, it has little say about what happens where government is concerned. When something moves individuals or groups enough to get involved, they’ll let you know.

We generally want city government to work like a car. The only time we care about the car is when it starts running rough. Your website can be as elaborate and complete as you want but you’re still not going to get many citizens wading through hundreds of online pages of a plan on how to spend federal money on community development.

If you as council members want to know what more people think, talk to as many as you can find. Otherwise, assume the public is reasonably satisfied with decisions you make. If not, they’ll let you know, and in extreme cases they might elect someone else next chance they get. That’s how representative government is supposed to work. And to that extent it still does. (hh)

From Helen Burns Sharp (former Albany city planning director), via Facebook:  “Planning is inherently boring”? I don’t think so. Have you been to places like Barcelona and Savannah? I wish we would recommit/commit to bold visions and wonderful public spaces that are really important to quality of life (and economic development).