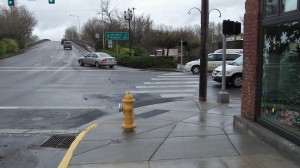 The “slip lane” would lead to Water Avenue to the right of the Lyon Street Bridge, pretty much straight down the middle of this view.

(For a reaction, see below)Albany’s riverfront street, Water Avenue, is not that easy to reach from Lyon Street, the main drag. That makes it tough to try to develop what part of the latest downtown plan calls the “east anchor,” one of the plan’s main features. The proposed solution is to build what has come to be called a “slip lane” from Lyon downtown to Water, just to the right of the Lyon Street bridge. Why it’s called a slip lane no one seems to know. Maybe it’s in anticipation of what happens after it is built and drivers go down it in freezing rain.

In any case, this slip lane is a complicated deal. First ODOT would have to allow it, since Lyon is part of state Highway 20. Before that can happen, some basic engineering and draftsmanship have to take place to see where the thing would go and how it would fit in, especially with neighboring property. All of this, as usual, takes money. So the advisory board of the Central Albany Revitalization Area has just agreed to spend $20,000 of its available cash on this preliminary work.

As for the idea of the “east anchor,” envisioned on Water Avenue, it’s hard to see what that could be. Traditionalists among us think of a downtown department store. But the changed shopping habits of America make that seem extremely unlikely. A supermarket then? No longer a good prospect since a big one, Ray’s, has opened just across the river. To be frank, the east anchor looks more and more like a mirage.

So is the slip lane pointless and the $20,000 about to the wasted? Not necessarily. Out-of-town drivers stuck in the right lane on Lyon and unable to make a left occasionally find themselves forced across the Willamette River into the wilds of Benton County when they really wanted to go to one of the restaurants on First Avenue. The slip lane would let them duck down to Water and make a left to get where they’re going. It would make the downtown traffic layout a little more useful. So let’s see what kind of insights that $20,000 will buy. (hh)

From Jo Rae Perkins (via Facebook):  This slip lane idea is another utter waste of money.  People can drive 2 blocks west, turn right on Broadalbin and right on Water Ave.  As for the people who accidentally end up going over the river, can turn around in the parking lot leading into Tom’s Garden Center.  Inconvenient, sure it might be, but things like that happen to all of us.  Happened to me just today — I went past a turn had to go up the road about a 1/3 of a mile before I could double back.  The only thing that should be built along the river is some nice condos.
The old Buzz Saw property has already shown it is hard to draw businesses down there.  What type of store is going to build there?  Retail needs visibility.  Any business that goes on the east needs to be a specified destination place.
This is just another waste of $20,000.  Then there will be the environmental studies, plus another attempt at some type of URD or other TIF zone.
One other thought, what about the people who take First Ave to Lyon and use the right hand lane, (including the 2 parking spaces in front of Janos and the Frame as part of the turn lane), to go to N. Albany?  A slip lane could prevent this and would probably be a cause for more accidents.
The city council won’t listen. This idea is just as illogical as the roundabout at Main and Salem Ave.

From Liz Oare, via Facebook: I love downtown Albany, don’t get me wrong, but many of the ideas that get approved for down here are nonsensical at best. I think the slip idea sounds interesting, but why would you spend the CARA funding on something that isn’t really helping a solid issue downtown? We need better businesses that serve a daily purpose within walking distance to residences (such as mine) downtown. It is also a death trap even trying to ride my bike on our streets to get anywhere here. What about that? I don’t know why you wouldn’t utilize the student population in a town adjacent to a “college town” where you can live in a more affordable and quiet area, either. Things are spread out far too much to make it easy to live, shop and work in just one area – which would be ideal. Those seem like issues to address to help Albany grow for the better in the long run.