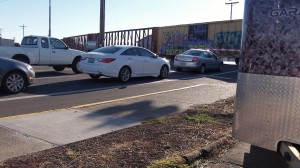 Waiting at the rail yard crossing on Queen. 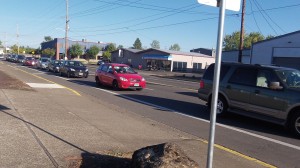 Everybody with a car in Albany has been delayed at the Queen Avenue crossing when the Portland & Western shunts freight cars back and forth to build trains. This was supposed to have become rare by now as the railroad expanded its Millersburg yard. But delays are still common. So how about this:

How about signals on Queen and Pacific that let motorists know when this crucial crossing is about to be blocked, and for how long? One such signal could be on westbound Queen just before Marion Street. When it’s activated, drivers could hang a right on Marion and Jackson and head over the overpass. This might not save them much time, but it would avoid the frustration of sitting at the crossing and seeing rail cars roll back and forth while the crossing arms are down.

Another set of early-warning signals could be placed on Pacific. If the crossing is about to be blocked for any length of time, motorists could go straight on Pacific instead of turning onto Queen, driving south as far as 34th or north across the overpass before turning east. Eastbound traffic on Queen would not need a special signal because drivers could see the gates coming down and could take that as their warning to avoid a delay by turning.

The Queen Avenue crossing has been a sore point with drivers for 40 years or so. Somebody should have thought of early-warning signals to avoid delays long ago. (hh)

From Ted Salmons:  Wow, foresight and planning from DOT.  Now that’s expecting a lot.  But hey, they’ve only had 40 years to address the problem. Don’t rush them.  They’ll get to it.  Soon.  Maybe.  Nahhhhh.

From David Moore on Facebook:  Excellent idea, Hasso. Even if it were a simple sandwich-type sign that the railroad workers put up when they are going to block the road for 20 minutes. That would still be better than it is now.