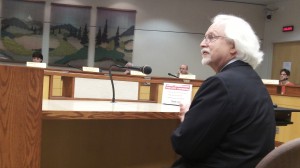 Until it is amended, Albany may have trouble with routine finances under the debt-limit charter amendment approved by voters this month. That was the gist of advice the city council got Wednesday night from Harvey Rogers, a renowned bond lawyer whose clients include the cities of Portland and Salem as well as several state agencies. It’s his business to certify that borrowings by public agencies are legal and proper.

The Albany initiative prohibits new debt and debt extensions unless authorized by a majority of electors. Rogers agrees with City Attorney Jim Delapoer that this means he could not give his unqualified endorsement to future city debt unless it is approved by more than half of all registered voters, which has never happened. He confirmed that last month’s refinancing of $30 million in water debt, which saved the city $5.6 million in interest over 20 years, would not have gotten his OK if it had come after the March 12 election instead of two weeks before.

Rogers explained what “debt” means according to the Oregon Supreme Court: The term includes general obligations bonds, any other borrowing pledging the full faith and credit of the city to repay, and any long-term contract not subject to appropriations, among others. Not considered a debt, though: water and sewer revenue bonds, obligations authorized by the legislature, and borrowing by the Albany urban renewal agency, CARA.

The council heard all this and then went into an executive session closed to the public to talk about what to do about the measure when it comes time to canvass the election result on April 10. Among the possibilities: Declare that the measure did not pass because it got fewer than a majority of all electors but pledge to conduct city business as though it had passed, and then propose a new charter amendment, perhaps in November, to carry out the intent of the voters without the complication of using the word “electors.” The council may get a preview of a resolution spelling out its intent at a work session on April 8. (hh)

Gordon L. Shadle: Let’s hope the council shows some common sense by passing Measure 22-117 and placing a cleaned-up (meeting Delapoer’s standard) charter amendment on the November ballot. Of course, if the council proposes watered-down language that preserves most, if not all, of the council’s current decision making power, then they should expect a counter punch from the people.
If the council does as you suggest and rejects Measure 22-117, the public scorn would be immense. And no mitigating actions like a cleaned-up amendment would overcome the disdain the public would hold for our elected officials. A rejection would certainly motivate some to start immediate litigation and/or a new petition drive.
The saddest part is the current deliberations are being held in secret. This issue is inherently political and deliberations should be conducted in public. Attorney-client confidentiality should not be invoked for political discussions. Last night was a good start. It’s time to lift the shroud of secrecy.