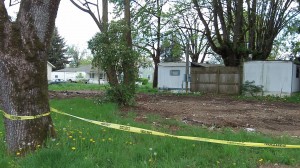 A CARA-aided project: Woodland Square trailer park is being razed over next year to make way for apartments.

Albany city officials should no longer ignore the effect that the city’s downtown urban renewal district, CARA, has on other governmental services in Linn County. According to a breakdown presented by urban renewal manager Kate Porsche, local governments this budget year are forced to give up $2.2 million to the downtown district. In 2013-14, it’s expected to be $2.3 million.

This year, Linn County law enforcement is giving up to CARA nearly $300,000 in tax revenue voters had approved as part of the county law enforcement levy. The city’s own police and fire levy is losing nearly $108,000. As approved by voters a year ago, the city levy goes up slightly this fall, so the loss to CARA will likely be bigger.

Now, Porsche has told the CARA advisory board that for 2013-14, the district will have a surplus of $1.2 million. One of the possibilities she mentioned is to levy that much less in taxes, meaning all other taxing districts would share that much more. According to my own rough calculations, for county law enforcement that would be about $150,000 more; for the city police and fire departments, about $54,000. For the city government generally, the added amount would be more than $400,000, and some of that could be budgeted for public safety as well.

Giving up this tax income would mean CARA could not start new projects for a while, but then again, as of now no new projects are planned. (hh)

Gordon L. Shadle responded on April 23: ARA/CARA should do the right thing and return the $1.2M surplus to the taxing districts they took it from.  ARA/CARA should then comply with Section 7 of Ordinance 5806 and obtain voter approval first should they decide to fund future projects with debt. This is a grand opportunity to gain some credibility with Albany residents. Will they squander it? Let’s hope not.