Albany: In fear of thieves 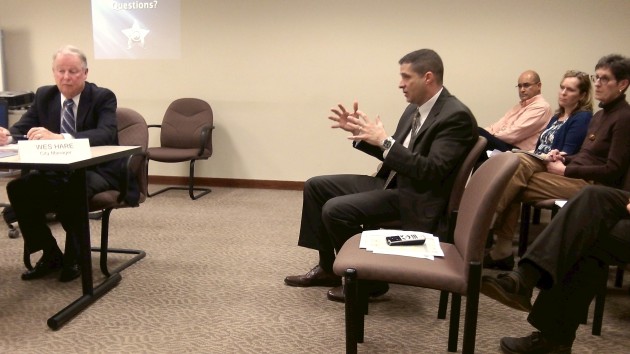 In Albany, residents on average have less to fear from violent crime than elsewhere in the state and nation. But they have to worry about losing their property to criminals more. Residents already know this, and it was confirmed by what Police Chief Mario Lattanzio has told the city council.

The chief gave the council a series of tables. They showed that Albany’s rate of violent crime — homicide, rape, robbery and aggravated assault — had fallen from a high of 2.26 per 1,000 residents in 2001 to a low of 0.83 last year, 2013. And in all those years, the violent crime rate in Albany has been far below the rates of Oregon, the Pacific states and the country as a whole.

The picture was reversed on major property crime including arson, burglary, theft, and vehicle theft. In that category, crime in Albany also has fallen, from a high of 98 per 1,000 in 2003 to 42 in 2013. But the Albany rate has been and remains above that of the state, the Pacific states and United States.

One obvious challenge for the chief, in his first year on the job after coming from metropolitan Mesa, Ariz., is to bring down the above-average property crime rate. He suggested that if and when the city builds a new police headquarters, as proposed, the building include holding cells for people picked up on warrants.

Often these are people for whom petty crime is a way of life. Lattanzio gave the council a real-life example. From last Oct. 21 to Feb. 2, this man was arrested eight times, on warrants each time, suggesting that he had ignored court appearances or orders after previous arrests. Each time the jail let him go right away or after a few hours, either on conditional releases or because the jail was full. Police officers might be forgiven if they began to think there was no point in picking somebody like that up.

If the police had the facilities, they could hold someone long enough to appear in Municipal Court. A brief jail sentence then might be imposed. If the man in Lattanzio’s example had been incarcerated for three months after his first arrest on two warrants, seven additional arrests would not have had to take place at all. Multiply that situation by a few hundred times, and you get the idea that with proper holding facilities, there might be time for additional patrols or other measures to discourage thieves from breaking into places and taking people’s stuff. (hh)


5 responses to “Albany: In fear of thieves”