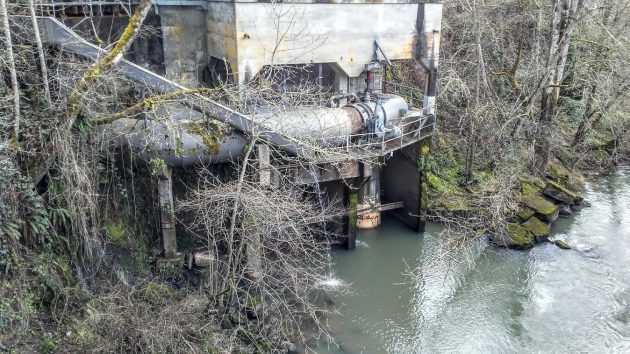 The outfall of the Albany hydropower plant: Quiet on March 25; nothing going on.

Speaking of electricity, what about Albany’s small hydropower plant on the Calapooia River at the end of the Santiam Canal?

You can see the turbine shaft and the outfall from the Third Avenue bridge. The last few times I came up that way from Bryant Way, the turbine was not turning and the outfall, which makes the river churn when the plant is operating, was quiet.

I checked with the city and got an update from Kristin Preston, the operations manager in Public Works.

Turns out the lone 500 kw generator in the powerhouse has been shut down since March 1.

The flow in the canal has been reduced below the amount needed to power the turbine for three main reasons: A survey is being done along sections of the banks where slides have to be repaired. A Linn County crew has been working on the bridge on Three Lakes Road, cleaning up storm debris. And the intake at the Vine Street water treatment plant is being modified as part of a construction project.

Preston says they hope to resume generating electricity in the next two weeks and then continue until June, when the Santiam River flow declines. Albany’s federal power license says the plant can’t operate when the river drops below 1,100 cubic feet per second.

As demonstrated by the need occasionally to repair or even shore up the banks of the 18-mile canal, maintenance costs never stop. Whatever the hydro plant earns goes toward defraying that cost. (hh)


12 responses to “Albany hydro: Why it’s currently shut down”