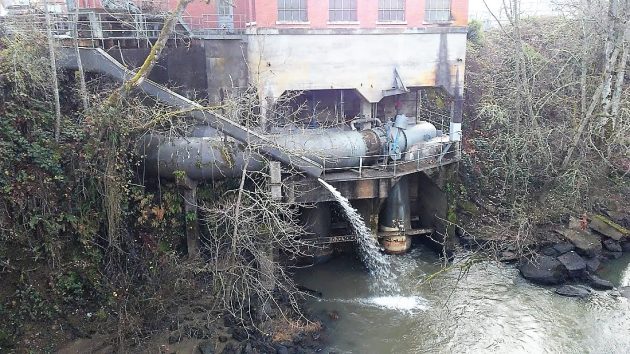 The underside of the Vine Street powerhouse as seen from the Third Avenue bridge today.

Albany Hydro, the 500-kw generator powered by water from the Santiam Canal, is back in business. It started up Friday when the flow in the canal was sufficient once again.

The generator is always shut down in the summer because Albany’s federal power license does not allow it to be run when the South Santiam River near Lebanon drops to 1,100 cubic feet per second or below. This year, river conditions would have allowed generation it to be restarted in early September, but it wasn’t. The flow had to be kept low while the city of Lebanon bored under the canal as part of its construction of a new water intake on the Santiam.

Lebanon finished its work on the canal last week, and Albany City Manager Peter Troeddson said in his regular Friday report to the council that the flow was being ramped up and Public Works would restart power generation later in the day

I went to take a look today. Sure enough, the turbine shaft was spinning and tons of water gushed from the turbine’s outfall into the Calapooia River. Years ago, somebody kindly daubed some red paint on the shaft so you can see whether it’s going around when you stand on the Third Avenue Bridge to Bryant Park. That’s as close as you can get unless you want to wade in the river.

Electricity from the generator is sold to Pacific Power. The income amounts to about $4,000 a week. So now that revenue stream, relatively small as it may be, is flowing once again. (hh)