The water you see rushing down the end of the Albany Santiam Canal on Friday is not, obviously, going through the turbine of Albany Hydro. The hydropower generator has been shut down since June, which is normal, but its restart this fall has been delayed.

I’ve been following the fortunes of Albany’s 500-kilowatt plant since before it started running with a new generator in 2008, and before that through all the years when the city was working to resume generating electricity at the Vine Street powerhouse. So every time I come up the Third Avenue bridge across the Calapooia, I glance to the right to see if the turbine’s shaft is turning.

This time of the year it usually is after being still during the summer, when Albany’s federal license prohibits running the plant as long as the South Santiam River flows at 1,100 cubic feet per second or less.

Councilman Dick Olsen recently asked about the power plant. This week the council heard from Chris Bailey, public works operations director. Even though the flow in the South Santiam would allow the plant to run, she said, the city had reduced flow in the canal in order to help a Lebanon construction project. Lebanon, she explained, is building a new water intake and was drilling a pipe underneath the canal.

If it hadn’t been for that project, the power plant could have started Sept. 3, which would have been a record early start. On Thursday, Bailey sent me an email: “If we had been generating power every day since Sept. 3 with no down time due to maintenance or other activities, and if we use records for average energy production per day, we could have provided a maximum of a little over 318,000 kwh, which would translate to about $24,000.”

How long will the pant remain silent? Another two weeks, Bailey estimated.

Since last winter, Albany officials have been reviewing whether the expenses — costs rising largely as a result of ever more stringent federal requirements for even this tiny hydro project — make it impractical to keep it running. That review may be nearing its end with a report to the city council soon.

The Vine Street plant’s output varies, based on conditions, but on average it produces 2.8 million kilowatt-hours of clean electric energy per year. This is said to be enough to power 244 homes. It isn’t a whole lot, obviously, but with the emphasis on clean power, you’d think the government would encourage this operation instead of stifling it with rules that may be appropriate for big projects like Green Peter but are nothing but overkill for this small plant. (hh) 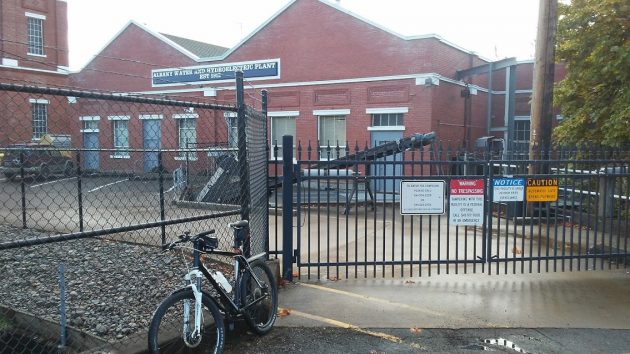 The historic Vine Street water and power plant on Friday.