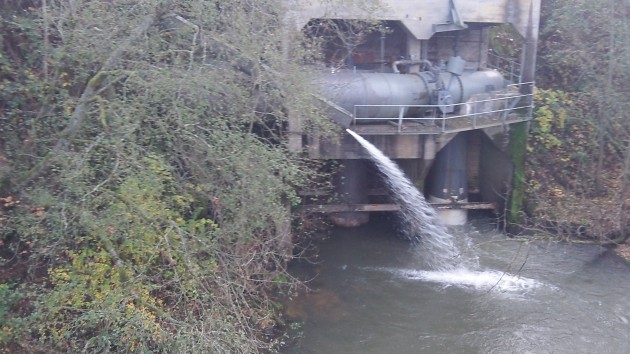 The underside of the powerhouse on the Calapooia river.

If you walk up the Calapooia River bridge from Albany’s Bryant Park — on the upstream side without a sidewalk, taking your life in your hands in case a big pickup comes by — look down to your right and you can see the turbine shaft of the city’s hydropower plant spinning again. It’s another sign of fall, in case the weather was not enough of a clue.

Because of water regulations, the hydro generator can’t run during the summer. But now it’s once again pumping juice into the Pacific Power grid. This is a good thing. Reactivating that historic plant cost the city about $2.2 million in 2009, including $1.6 million for the Chinese-built generator. Now it’s making money when it runs. 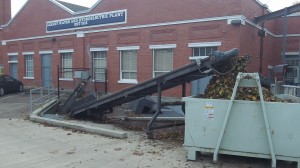 This system removes debris from the screen at the power plant’s intake.

Shepard says the department this year started tracking work on the Santiam Canal attributable to hydro rather than general canal maintenance. He hopes this will “give us a better picture of true costs next year.”

The city council decided in the 1990s to revive the dormant power house not necessarily to make money, but mainly to safeguard its water rights associated with the Santiam Canal. Water power from the canal was important in Albany history. In a small but tangible way, Albany is keeping this history alive. (hh)