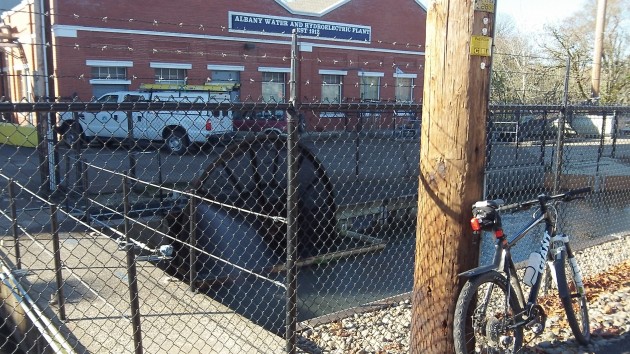 Albany’s historic water and electric plant on a sunny day.

Last year and this, sad to say, have not been money makers for Albany Hydro. The generator had to be shut down much of the time, but it started spinning again this month. And the outlook for next year depends on whether we get a reasonable amount of mountain snow.

I usually glance over at the power plant when I ride my bike up the Third Avenue bridge on the Calapooia River. A couple of weeks ago I noticed, for the first time in months, that the turbine was once again turning. (It’s not easy to see and would be impossible, from the bridge, if they hadn’t thoughtfully marked the turtbine shaft with spots of red paint.)

The city restored power generation at the historic power house in 2009 at the cost of about $2.2 million, including $1.6 million for a new, Chinese-built 500 kilowatt generator. So I was happy to see the plant working again, and I asked City Hall about the money angle. Chris Bailey, the public works director for operations, gathered the numbers and got back to me by email with the details.

“First, we were not able to operate the canal at the higher flows needed for hydropower during the months of October, November, and December 2014 because of an extensive repair project along the Vine Street section of the canal that lasted much longer than anticipated. This resulted in no power being produced during those three months when the generator would typically be operating.

“Second, the curtailment of hydropower generation began earlier in the spring of 2015 than in previous years because of low water conditions in the South Santiam River. We have a requirement in the FERC hydropower license that requires the generation of hydropower to cease when the river falls below a certain flow level. In previous years, we were able to generate power through June before river levels fell below our required cutoff point.

“The drought conditions took their toll on our hydropower production this year and we had to stop diverting flow for hydro in May. The impact will be felt for the fiscal year 2015-16 values as well because we were not able to start generating hydropower until earlier this month because of continuing low water levels in the South Santiam River. So all together last fiscal year, we missed five months out of the nine that we typically operate the hydropower generator.”

Operating the generator accounted for $56,200 in wages, Bailey told me. She didn’t have immedate access to other costs such as materials, but she was sure there were some of those as well.

Back in the 1990s, when the city council decided to seek a 50-year federal hydropower license, the main idea was not to make money with the project but to secure the city’s water rights associated with the canal. Revenue from power sales would be a bonus and might help cover canal maintenance, the thinking was. Maintenance is an expensive item. Last year’s canal bank repairs Bailey mentioned cost the city $335,950.

So now all we can to do is hope for enough water coming down the river so for a few decades the plant can hum along every year from October through June. (hh)