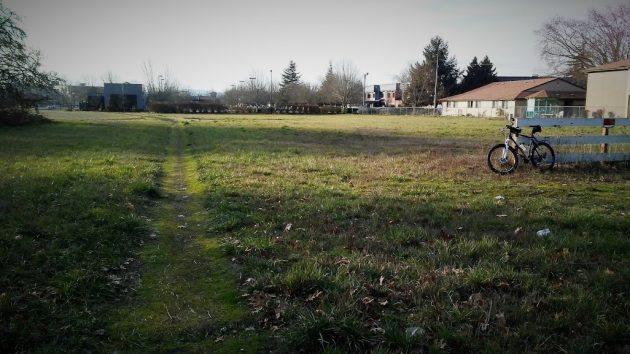 This vacant site in the 1500 block west of Waverly Drive has been approved for 96 apartments. Albany Public Library is way in the background in center right.

Since housing seems to be on everybody’s mind, it may be worth noting that in 2018 Albany approved plans for 300 apartments, most recently 96 units in the Santiam Neighborhood between Waverly Drive and Davidson Street.

Approvals early in the year included 132 units northwest of the roundabout on Knox Butte Road in East Albany and the 40-unit Sunset Village on Hickory Street in North Albany. Both projects are under construction.

The most recent project, designated on the application simply as Albany Apartments, got the green light when the planning commission approved a conditional use permit on Dec. 3. The plans call for 96 units of one to three bedrooms each in seven separate two-story buildings, along with 164 parking spaces, the exact number required by the city. There also will be 24 parking slots for bikes.

The project was designed by MacKenzie, the same Portland firm that drew the plans for Albany’s new police headquarters and main fire station.

The site consists of about 4.3 acres, a vacant field of irregular shape now covered mostly with grass. It has short sections of frontage on Waverly Drive and 16th Avenue as well as Davidson Street and the cul-de-sac called Brighton Way, where Security Alarm now has its office. The land’s owners, based in Portland, bought the two parcels last June for $1,935,000, according to Linn County tax records.

So far, the city website shows no application for a building permit, but presumably that’s just a matter of time.

On its northwest side, the apartment site is only a few steps away from the main branch of the Albany Public Library on 14th Avenue. So if nothing else, the tenants should have no trouble getting their hands on things to read. (hh) 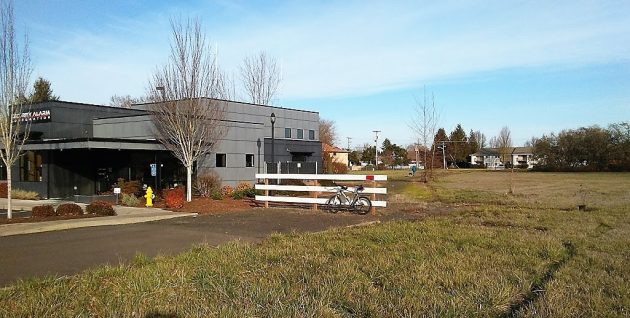 A view of part of the apartment site from Brighton Way on the west.

The MacKenzie firm added this rendering to its application for a conditional use permit.