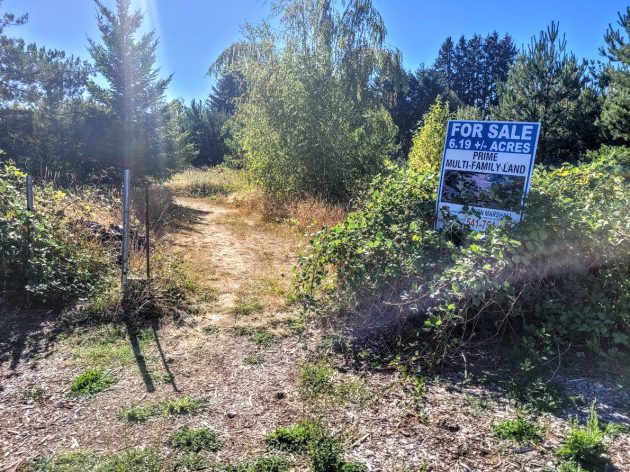 Not now: The firm that poposed to build 180 apartments on this North Albany site withdrew its application for city housing funds.

The Albany City Council wasn’t ready to make a decision Monday about which of five applicants for a share of $1 million in housing funds would get how much.

The applicants made their pitches during a council work session. But the council agred it wanted a recommendation from the volunteer Community Development Commission, which will meet next Monday.

One applicant, Lincoln Avenue Capital based in Santa Monica, Calif., had withdrawn its bid before the meeting. It told city officials that a state housing grant had not been approved, and so it could not go ahead with its project with the city application at this time. It had wanted to build 180 apartments off Hickory Street in North Albany

Councilwoman Stacey Bartholomew recused herself from the council during the applicants’ presentations. She’s the head of Creating Housing Coalition, which applied for part of the city money to help get started with its planned “tiny house” village on Waverly Drive north of Pacific.

The other applicants, for varying amounts, are Jackson Street Youth Shelter, DevNW, Albany Habitat for Humanities, and Helping Hands.

The council will have to decide how to spend the $1 million Albany got from the Oregon legislature last year to adddress housing affordability and homelessness. Twelve other cities received the same amount.

The five organizations all made a good case for their respective programs and building plans. To get the details of each, watch the council session on YouTube or the city’s website when it’s available, probably later today, Tuesday. (hh)