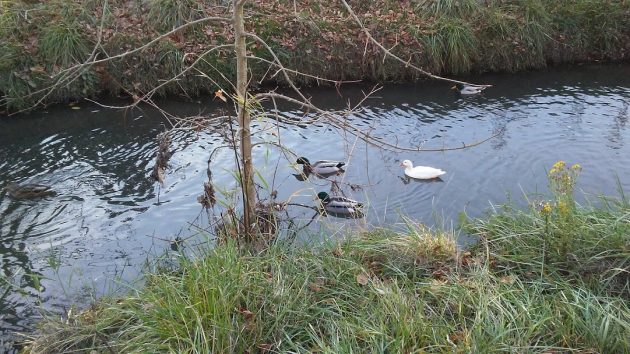 Periwinkle Creek might be in violation of the state’s new stormwater regulation because it carries storm runoff to the Willamette River.

The state Department of Environmental Quality’s latest move to control the discharge of stormwater will cause the city of Albany and property owners all kinds of problems, so the city is going to court.

The city council on Wednesday voted unanimously to seek “judicial review” of a stormwater discharge permit promulgated by the DEQ last fall. The city plans to file its complaint with the Linn County Circuit Court before the filing deadline at the end of this month.

The permit, a first for Albany because it passed 50,000 population in the last census, takes effect in March and ostensibly aims to prevent rainwater runoff to cause violations of water quality standards in the receiving rivers and streams. In practice, it practically bans the discharge of untreated runoff.

The council has had briefings about this over the last couple of years as the permit was being prepared, and as city officials tried to tell the DEQ that Albany could not comply without incurring enormous costs. Among other things, the permit requires retention ponds for rainwater on sites with more than a certain amount impervious surface. City officials say this is not feasible, so the permit, if it stands, will make it impossible to develop large amounts of land in town.

Unless the DEQ permit is blocked or modified, Albany will be in violation of it the moment it takes effect in March.

The city contends that the regulation goes beyond what the federal Clean Water Act requires. And because the state provides no money to carry it out, Albany argues that it amounts to an unfunded mandate, which the state constitution prohibits.

Corvallis and other towns affected by the blanket permit have already approved court action against it. Millersburg did too. It’s affected because it’s in a section of Linn County covered by the permit.

On Wednesday night, the council called an executive session closed to the public to get a briefing from Mark Yeager, the city’s lead official on this issue. Then it reopened its public session and authorized the court action without further explanation. Thus anyone watching the council on TV did not get Yeager’s summary of the permit’s effects, and the reasons for the staff recommendation to go to court.

The city staff had prepared a “media release” about the recommended action. But the staff did not release the release after the council action because it had not yet been cleared by the city’s Portland lawyers. (hh)


7 responses to “Albany going to court over DEQ permit”