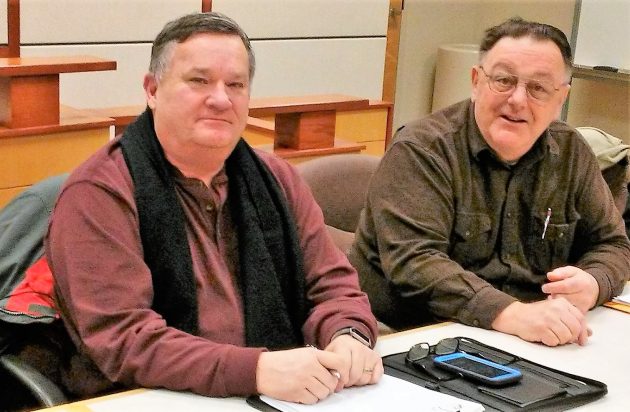 Councilmen Sykes, left, and Kellum in a file shot from January 2017.

In the May 15 primary, Albany voters will be asked to approve a city gas tax of 5 cents per gallon. But two councilmen say the idea of a local tax on motor fuel is either wrong or premature.

Councilors Rich Kellum and Mike Sykes voted no on Wednesday night when the council decided to go ahead with a fuel tax proposal pushed by Mayor Sharon Konopa. Bill Coburn, Dick Olsen, Bessie Johnson, and Ray Kopczynski voted to pass a resolution putting the proposal on the ballot.

State law requires that any local motor fuel tax have the voters’ OK. If the Albany measure passes on May 15, the council then could act on an ordinance to impose the tax and spell out the details. It could not, though, go beyond the 5 cents/gallon specified in the ballot measure.

Kellum argued, in vain, for waiting until other mid-valley jurisdictions also pass a local gas tax. He worried that the Love’s truck stop under construction in Millersburg would put Albany stations at an even greater competitive disadvantage if Albany has an extra tax and Millersburg doesn’t.

Sykes referred to increases in the state gas tax, already approved and scheduled to continue, and mentioned discussions in Congress about hiking the federal gas tax by 25 cents per gallon. “I can’t go along with this at all,” he said of the Albany proposal. “There’s got to be a better way.”

The council learned, from Public Works Operations Director Chris Bailey, that the state would charge a $30,000 setup fee to start collecting the tax for the city, but ongoing fees would be minimal. Springfield collected more than $1 million from its 3-cent local gas tax last year and paid less than $5,000 in state handling fees.

The Albany 5-cent tax has been estimated to yield about $1.25 million a year in revenue, which would be dedicated to street maintenance and repair. (hh)