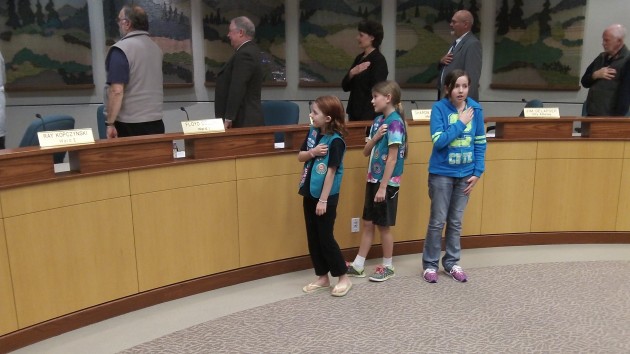 These Girl Scouts were in the council audience Wednesday when Mayor Sharon Konopa invited them to lead everyone in the Pledge of Allegiance.

If everything goes as planned, in no more than seven years some 500 people working at Albany-area industries will have had specialized training on equipment bought with a grant from the Albany City Council. The council voted 5-1 Wednesday to make up to $2.9 million available to Linn-Benton Community College to buy specific machines and tools on which to train students in fields such as nondestructive testing, advanced welding, machine tool controls and mechatronics. Councilor Dick Olsen was opposed because, among other reasons, he thinks the college should have included the funding in its recent bond issue. The council vote was to approve a written but vague agreement — more like a set of promises — between the city, the college and seven industrial employers. The city will pay for the equipment, the college will do the training, and the industries promise, within seven years, “to use reasonable efforts to hire, in conjunction with other manufacturers in the Albany area, not fewer than 500 graduates of the Workforce Program funded by this agreement into existing or newly created full-time manufacturing jobs.” The council had agreed to the program months ago, but it took until now to iron out the written agreement. The companies involved are Oregon Freeze Dry, ATI Cast Products, ATI Specialty Alloys and Components, Viper Northwest, Selmet Inc., National Frozen Foods, and L&M Industrial Fabrication. The companies, the college and the Albany Chamber of Commerce had jointly worked up this approach to training people for industrial jobs the companies said they had a hard time filling.  Money for the equipment purchases will come from the portion of the city’s 2010 Pepsi settlement set aside for economic development. Councilor Floyd Collins described the council’s action as an effort at sustaining Albany’s employers and industrial base. The number of jobs envisioned by the program will be more than what Pepsi’s never-built Gatorade and bottle factory would have produced, he said. What will the city’s money buy? You had to ask. On the long list of prospective purchases attached to the agreement there is one $447,098 Westpro UT immersion tank. It’s used in nondestructive testing, but what it immerses I have no idea. (hh)