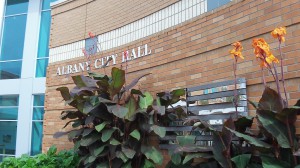 Tom Cordier, the citizen activist in Albany, has scored a partial victory for the public’s right to get public records, in this case email addresses. The case also raises a question about the city’s own use of those addresses.

Cordier had sought to use a list of 33,800 addresses to which the city government emails its monthly newsletter. The city refused, and Cordier appealed to Linn County District Attorney Doug Marteeny. The DA agreed with the city that emails of library and public utility patrons are exempt from disclosure by law, but that 4,600 addresses obtained by Parks and Recreation must be disclosed because the city had not met a test for confidentiality in each individual case.

The city had also maintained, and the DA agreed, that the addresses it gets can be used for any city purpose even if intended mainly to communicate on library, utility or parks & rec programs. Which brings us to City Bridges, the newsletter.

The October issue has reminders to keep debris out of the storm drains and trash cans off sidewalks and bike lanes. It also, however, has an item about Obamacare. And it has a puzzling link, “Getting to Know Grapes,” which points not to wine but to a story in the Salem newspaper about the retired wife of an Albany official.

If it’s going to use confidential email lists to communicate on city business, the city might want to make sure it does only that. (hh)

From Tom Cordier:   Thank you for pointing out that the articles in “Bridges” are not confined to official city business. The next question is who is the editor of Bridges? How can those who want to be read by 33,000 submit an article for consideration? Will non-conforming voices be allowed to contribute?
Governments always seek to expand their reach and Albany is no different. When government constructs systems (always at taxpayer expense) to have the biggest, least expensive megaphone, then we have a government-controlled press. Albany now operates a TV program and an e-news platform — a slippery slope.