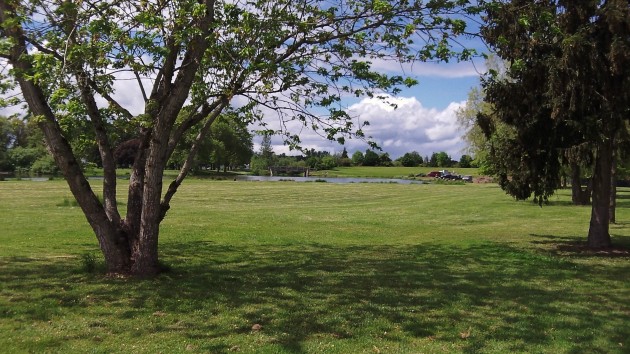 This is roughly where the dog park will be. Timber Lake is in the background.

What’s new on the plan to fence in an area for dogs at Albany’s Timber Linn Park? At last report, in this space on May 6, Parks and Recreation Director Ed Hodney said he had settled on Timber Linn as the place but had not yet chosen the specific corner of the park. Now he has.

Asked for an update Sunday about the location and any other progress, Hodney tapped out a reply on his iPhone: “North of lake, adjacent to maintenance compound, existing parking. Getting bids on fencing now. Hope for opening end of June, mid-July.”

That flat expanse of grass on the north side of Timber Lake, east of the maintenance buildings and south of Dogwood Avenue, is where I guessed the dog park would have to go when I wrote about this on May 6. It’s just about the only large space in the developed portion of the 90-acre park that is not already used for something else.

The plan is to fence in about two acres as a place where owners can let their dogs off the leash to run and play. The idea of a dog park had been aired at a public meeting in March, where it received strong support and the parks department decided to go ahead.

Hodney has pointed out that an area for unleashed dogs had been part of Albany park planning for a long time. (hh)