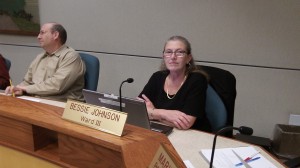 Councilor Bessie Johnson made the motion. Bill Coburn, to her right, voted no.

As if it didn’t have enough to do, the Albany City Council has voted to enter the debate about marijuana. On Wednesday night, with nothing much on the official agenda, Councilwoman Bessie Johnson spoke up and said she didn’t want medical marijuana dispensaries in Albany. She made a motion to instruct the city staff to look into what “options” the council would have to keep dispensaries out, and three of her colleagues — Rich Kellum, Floyd Collins and Dick Olsen — voted with her to have that report done. Councilors Ray Kopczynski and Bill Coburn voted no.

Later, Mayor Sharon Konopa was dismayed. She expected to be deluged with phone calls as a result of the vote.

Partly to cut down on the illicit trade prompted by medical marijuana, and to help patients who use it, the 2013 legislature passed a law telling the Oregon Health Authority to license dispensaries of the weed. A state committee has been working on regulations and on the fees dispensaries would have to pay, already leading to complaints from marijuana advocates.

Johnson read from a newspaper article reporting that some cities were trying to ban dispensaries. The Medford City Council, for instance, voted to cancel the business license of anyone dealing in products illegal under federal law, which marijuana is. Albany does not license businesses, so that option is not available.

The task of listing Albany’s options to prohibit dispensaries will fall largely to City Attorney Jim Delapoer. He did not seem to relish the task. “Just tell me what you want,” he said. There was no word on when the options report might come back or what if any action the council might then take. (hh)

From Dan Leard, on Facebook:  City of Albany needs to deal with more relevant issues like traffic, infrastructure, and public safety. This BS of MJ will be sorted out by the politicians of the federal government…..not small town America.  DC will do what they want and its quite obvious they don’t give a rats arse about what we think.

David Moore, on Facebook:   Well, if the constitution does not guarantee the widespread use of marijuana for many purposes, then it is not worth the hemp it’s printed on; and George Washington, himself, would not have required every farmer to plant marijuana; and he would not have said that it will save the republic. The real problem is alcohol.

Barbara Casali-Mingus, on Facebook:  This is just silly. The council needs to deal with real issues. Perhaps they could do something about meth. It seems to be at the root of so many crimes against people and property.
Gordon L. Shadle:  I can’t wait to attend the public meeting where the proprietor of a medical marijuana dispensary requests free money from CARA or the Pepsi fund to set up shop downtown. I mean, we’re talking “economic development,” right?
Councilman Ray Kopczynski:  My take on last night’s vote asking to get more info/legal opinions around the new state “Medical Marijuana Dispensary” law in an effort to block it for happening in Albany: I was one of two councilors to vote “no.”   Getting more information in and of itself is quite innocuous in this situation.
Years ago Oregon deemed medical marijuana was acceptable within specific guidelines.  Some folks believe that process has been much abused.  That’s an entirely different discussion.
This past session, Oregon deemed medical marijuana dispensaries were also acceptable, subject to oversight, regulations, etc. — yet to be determined.  That is currently in the forming (dare I say fomenting?) stage.  And, to our benefit, our state representative Andy Olson is a key player in that process.  I am all for allowing that to unfold by design.
I believe it is a tad naive of us to try and bring back Prohibition involving a substance that Oregon has already deemed acceptable for certain uses and which the Feds have also stated they will not prosecute — even though their law says it is a serious drug.  Trying to put the genie back in that bottle, while maybe a “feel good” position, in no way will it stop the use of marijuana. I come down unequivocally on the side of trying to regulate it and tax it — no different than alcohol or tobacco.
Posted in: Commentary, News
Tags: Albany City Council, medical marijuana